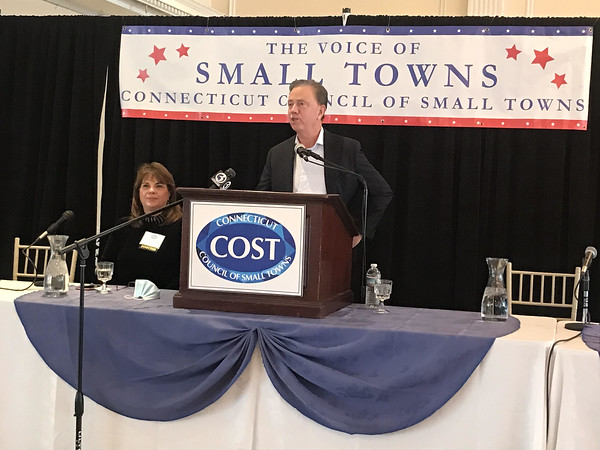 HARTFORD - State lawmakers voted to temporarily extend some of Gov. Ned Lamont's remaining pandemic-related executive orders on Thursday, including a statewide mask mandate for schools and child care centers, despite assertions from Republicans that Connecticut is well past the emergency phase of the pandemic.

The governor, whose emergency powers are slated to expire on Feb. 15, has said he wants to keep the mask mandate in place until Feb. 28 before allowing local school boards to decide whether masking is necessary in their schools. The legislation, however, would continue state officials’ authority to impose a statewide mandate until June 30, in case the state's COVID-19 situation worsens.

“This bill establishes a pathway and a timeline for our state to transition from responding to COVID to living with COVID,” said Rep. Mike D’Agostino, D-Hamden, adding how the “select handful“ of orders will ”allow us to live normally and respond if necessary to the unpredictable nature of COVID.”

The Democratic-controlled House of Representatives voted 86-62, with nine Democrats joining Republicans in opposition. The bill now awaits a vote Monday in the Senate, also controlled by Democrats.

The list of executive orders being extended includes requiring vaccination or testing for nursing home visitors; relaxing certain training and hiring requirements for medical professionals to address staffing shortages; and waiving bidding requirements to procure goods and services needed to respond to the pandemic.

The legislation also continues an order requiring nursing home staff be fully vaccinated with a booster shot. They faced a Feb. 11 deadline to get a booster, but the bill extends the deadline to March 7. Most of the executive orders are scheduled to sunset on April 15.

Yet the mask mandate took center stage during Thursday's debate in the House of Representatives. Republicans and parents’ rights activists say any masking mandate, statewide or local, isn't necessary and parents should decide whether their children wear masks. Many have raised concerns about the impact of prolonged mask wearing on learning and social development.

“We need to start getting kids back to where they can learn,” said Rep. Jay Case, R-Winchester. “Our kids are losing. They've lost two years of their childhood. They lost two years of being with their friends and playing and doing fun things that we all used to do.”

The Democratic-controlled state House of Representatives, along mostly party lines, shot down a Republican amendment to replace the mandate with an option for parents and guardians to have their child wear a mask.

Earlier Thursday, the House of Representatives voted 89-56 in favor of a resolution that continues the state's public health and civil preparedness emergencies through June 30.

Rather, Democrats say the states of emergency are necessary so Connecticut can keep getting federal pandemic relief funds, including roughly $31 million a month in extra benefits under the Supplemental Nutrition Assistance Program, or SNAP.

The Democratic-controlled General Assembly also wants the public health and civil preparedness emergencies in place as “an overall recognition of what we’re still going through as a state,” D’Agostino said.

“This does not grant the governor any particular powers," he said. “This is solely, by its terms, a legislative declaration pursuant to our constitutional power.”

Despite such assurances, Republicans called the resolution unnecessary and arbitrary, representing continued government overreach into people's lives as the pandemic appears to be winding down.

“The people of this state are tired,“ said Rep. Gale Mastrofrancesco, R-Wolcott. ”They no longer want to live under that declaration. They want to be free again to do what they want and they want the Legislature to do its job."

But state Rep. Jonathan Steinberg, D-Westport, the co-chairman of the Public Health Committee, said everyone is “on the same page" and wants things to get back to normal. The difference, he said, is waiting a couple more weeks to lift the statewide mandate.

“We are on the brink of getting beyond this thing,” he said.