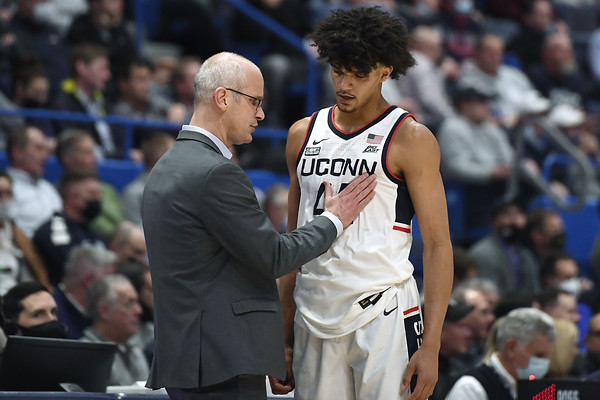 Connecticut's Andre Jackson goes up for a basket as Butler's Simas Lukosius defends during the second half of an NCAA college basketball game Tuesday, Jan. 18, 2022, in Hartford, Conn. (AP Photo/Jessica Hill) Buy this photo

‚ÄúIt‚Äôs sick,‚Äù is how UConn coach Dan Hurley puts it.

Indeed, coach, it is.

The 6-foot-6 sophomore from Amsterdam, New York, is such the aerial acrobat that even his missed dunks draw gasps from onlookers.

That certainly was the case Tuesday night at the XL Center when a tip-dunk attempt by Jackson was perhaps the most impressive play in the No. 25 Huskies‚Äô 76-59 victory over Butler.

The late Stanley Robinson remains the best dunker in UConn history, we‚Äôd wager, but Jackson has a chance to eclipse even the great ‚ÄúSticks.‚Äù

But it‚Äôs Jackson‚Äôs non-dunking plays that have thrilled his coaches lately. Jackson drilled three 3-pointers against the Bulldogs, and finished with his first career double-double of 12 points and 10 rebounds. He also had three assists, a steal, and a blocked shot.

‚ÄúIt‚Äôs great to see him get rewarded with the made 3‚Äôs because he‚Äôs in the gym as much as anyone I‚Äôve ever seen,‚Äù Hurley said.

What used to be one of Jackson‚Äôs biggest liabilities is suddenly a super power.

He made just two of his 17 attempts from behind the 3-point arc last season as a freshman with the Huskies. This season he‚Äôs a whopping 13-for-25, connecting at a team-high 52 percent.

Jackson‚Äôs shot isn‚Äôt the most traditional. And for a man who spends most of the game soaring three feet off the ground, his feet barely leave the floor when he shoots from the outside.

Jackson‚Äôs shot style seems to have been tweaked just slightly from a year ago, though he questions that observation.

‚ÄúI don‚Äôt think I changed my form, I just worked on it. Starting last year, every day I was in the gym,‚Äù Jackson said. ‚ÄúI‚Äôm just starting to see some payoff from the work I put in over the summer, over the time since I‚Äôve been at UConn, and before I got to UConn. I knew that was a big weakness, now I‚Äôm trying to make it a strength.‚Äù

Consecutive 3-pointers by Jackson in the first half Tuesday helped UConn pull away, and never really look back, from Butler.

His 12 points gave him double figures in points for the fourth straight game, but Jackson wasn‚Äôt overly pleased with his performance Tuesday. He felt his defense on the likes of Butler‚Äôs Simas Lukosius could have been better.

Still, his one-handed tip that nearly brought the house down in Hartford was amazing even though it counted for zero points.

‚ÄúI was running the floor and I seen somebody ahead of me going to finish. I kind of just went for it,‚Äù Jackson said. ‚ÄúIt bounced the right way, I just should have dunked it harder and I think would have made it. But after I missed it, I seen R.J. (Cole) got the rebound, so I was excited.‚Äù

And although his miss was much more impressive than the others, Jackson‚Äôs missed dunk was one of many miscues at the rim on offense for UConn Tuesday.

Hurley actually thinks Jackson has relied a little too much on his dunks in the past - not that the coach is dissuading Jackson from dunking any time he feels he can.

‚ÄúThe thing with Andre is he was able to dunk so much as a high school player,‚Äù Hurley said.

‚ÄúIt was a constant highlight. He didn‚Äôt have to develop finishes and nuance around the basket,‚Äù Hurley continued. ‚ÄúBut he‚Äôs starting to figure that piece out. And that makes him a very, very dangerous man as he understands how to get to rim and develop different creativities with how to finish in there.‚Äù

‚ÄúThe fruits of that labor is just beginning to show itself,‚Äù Hurley said. ‚ÄúBut he‚Äôs got another level that he can take his game to.‚Äù

We are assuming Hurley means a metaphorical level. On a physical level, he‚Äôs already jumping out of the gym.