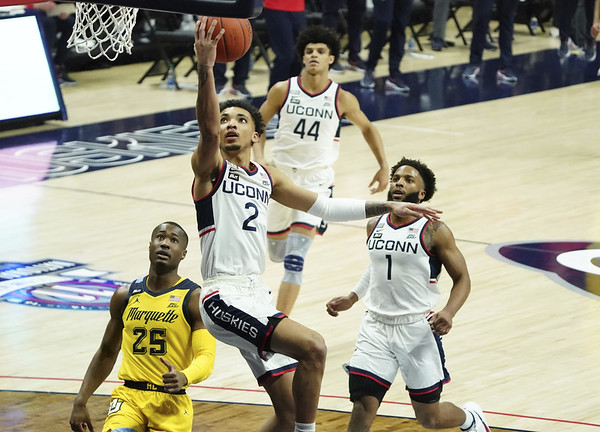 Connecticut guard James Bouknight (2) handles the ball against the Marquette in the first half of an NCAA college basketball game Saturday, Feb. 27, 2021, in Storrs, Conn. (David Butler II/Pool Photo via AP) Buy this photo
Published on Wednesday, 31 March 2021 20:05
Written by NEIL OSTROUT

James Bouknightâ€™s time with the UConn menâ€™s basketball team will, as expected, end after two years.

The sophomore guard announced Wednesday that he would forgo his final two years of eligibility and enter the 2021 NBA Draft.

â€śPlaying in the NBA has been a dream of mine since I was a kid and to be in this position is a dream come true,â€ť Bouknight wrote on his social media account Wednesday afternoon. â€śUConn has become my home away from home and I will always BLEED BLUE!!!â€ť

A 6-foot-5 guard from Brooklyn, Bouknight has a chance to be taken early in the draft. NBAdraft.net projects him to go 13th.

Bouknight finishes his collegiate career having played in 43 games. He amassed 645 points, 200 rebounds and 63 assists.

His most impressive game might have come in a UConn loss. He tied a Gampel Pavilion record with 40 points in his first-ever Big East game, a 76-74 overtime loss to Creighton on Dec. 20.

â€śItâ€™s been an honor to put on the UConn jersey every day,â€ť Bouknight wrote. â€śIâ€™ve grown so much as a player here but more importantly as a person. I will cherish every experience Iâ€™ve had over the last 2 years and I truly believe every one of those experiences has prepared me for success as I move forward in my career.â€ť

The NBA Draft will be held July 29.

Forty-two UConn players have been selected in the NBA Draft previously, including 13 in the lottery. UConnâ€™s most recent lottery pick was Andre Drummond in 2012.

UConn finished its season 15-8, losing to Maryland in the first round of the NCAA Tournament. The Huskies were 11-4 in games Bouknight played.

Bouknight scored 15 points in his final game, the loss to Maryland. He was 1-for-6 from 3-point range and 2-for-6 from the free throw line.

Upon announcing his departure, Bouknight thanked many of his supporters.

â€śFirst and foremost Iâ€™d like to thank coach Hurley and coach Kimani Young for recruiting me, believing in me and giving me the opportunity to come to UConn and play for this historic program,â€ť Bouknight wrote. â€śI want to thank the entire UConn Nation for accepting me with open arms and supporting me every step of the way. I want to thank my family for always pushing me and encouraging me to chase my dreams. I also want to thank my teammates for creating a culture of winning here that Iâ€™ve been lucky to be a part of.â€ť