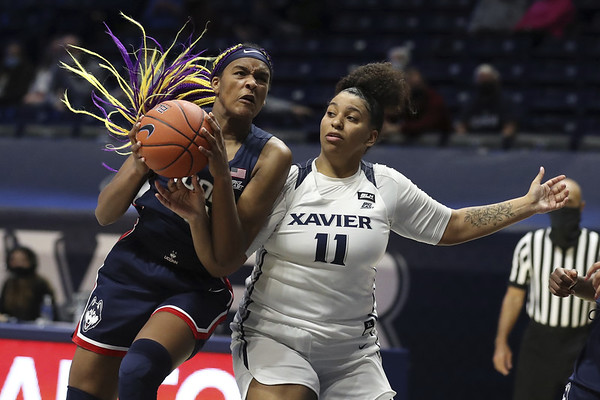 Edwards recorded her first double-double of the year Saturday with 16 points and a season high 11 rebounds in the top-ranked Huskiesâ€™ 83-32 Big East rout of Xavier at the Cintas Center in Cincinnati.

â€śI just like being more competitive and aggressive offensively and defensively,â€ť Edwards said. â€śWhether thatâ€™s rebounding, getting my teammates open, going off pick and roll action, I like being in rhythm and being in the flow of the offense and locking down on defense.â€ť

The 6-foot-3 Canadian likes the way sheâ€™s playing in February and the Huskies love what they see.

That bodes well for March and, UConn hopes, for April.

In 18 games (she missed the Villanova game on Dec. 22 with an ankle injury) including two starts on the season, Edwards is averaging 9.7 points and 4.6 rebounds in 20.1 minutes per game. Her 67.6 field-goal percentage leads the Big East and would lead the nation if she had the necessary field goals/attempts to qualify. She had her season best of 22 points against St. Johnâ€™s on Feb. 3 at Gampel Pavilion.

During UConnâ€™s eight-game winning streak her numbers are 11.8 points on 68.9 percent shooting and 5.1 rebounds.

â€śI see no really why she canâ€™t be that and then some from now until the end of the season.â€ť

The Huskies (18-1, 15-0 Big East) clinched a share of the conference regular season title Saturday. By the time they hit the floor at Creighton on Thursday, they may have wrapped up the outright crown and the No. 1 seed for the Big East Tournament. Second-place Marquette hosts Creighton tonight and visits DePaul Wednesday and one loss by the Golden Eagles will put all the focus on the race for second.

UConn made quick work of Xavier, which was playing only its fourth game since New Yearâ€™s Day due to COVID-19 issues.

Auriemma was able to use different combinations and one was again using Edwards alongside Olivia Nelson-Ododa.

For Edwards, sheâ€™s been effective with the 6-foot-5 center - the effort in the win over South Carolina two weeks ago stands out - but also when sheâ€™s been alone getting things done in the paint.

â€śItâ€™s obviously a huge benefit to have two post players who can both play together, complement each other, and spell each other,â€ť Auriemma said. â€śThey have different skill sets so itâ€™s something we obviously didnâ€™t have last year, and you can see the difference that itâ€™s made.

The days of former two-time All-American Gabby Williams at 5-11 - as great a defender as she was at UConn - trying to guard a 6-5 or taller post player are over - at least for a couple of years.

Edwardsâ€™ best days seem to be ahead.

â€śThereâ€™s not a time where I feel uncomfortable having Aaliyah on the floor,â€ť Auriemma said. â€śSheâ€™d be a lot better but she gets in her own way sometimes. As she just plays more she gets better and better all the time.