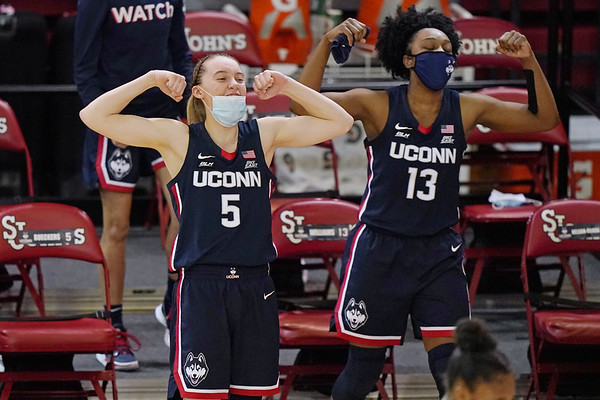 UConn guards Paige Bueckers (5) and Christyn Williams (13) react from the bench during the fourth quarter of the team's game against St. John's on Wednesday | AP Buy this photo
Published on Wednesday, 17 February 2021 21:04
Written by DOUG FEINBERG

NEW YORK - Christyn Williams and the top-ranked UConn Huskies looked refreshed after a couple days off.

Williams scored 21 points and Paige Bueckers added 20 to help UConn cruise to a 77-32 win over St. John's on Wednesday night.

The Huskies started February with five games in 10 days before getting last weekend off.

“We showed up tonight with fresh legs and fresh minds and you could see it,” UConn coach Geno Auriemma said. “When you go every other day with a game, you mentally get more tired then you do physically. Then the physical stuff follows. Get out of that into a regular mode, that mentally put us in a really good place.”

UConn had been getting off to slow starts lately, but took command early Wednesday, building an 18-6 lead after the first quarter behind Olivia Nelson-Ododa, who had eight points in the opening period. She finished the game with 17 points.

The Red Storm (6-12, 3-9) had more turnovers - seven - then points or made baskets in the quarter. They tried to slow the game, working the shot clock down on many possessions. That resulted in either tough shots to beat the buzzer or a shot-clock violation.

“I thought our defense was really good. It was good team-wise and we did a great job individually defensively,” Auriemma said. “I thought as a team, our team defense was outstanding tonight. We were really locked in with what we wanted to do. It was just really, really good. They didn’t get a lot of clean, easy, open looks.”

UConn continued its hot shooting in the second quarter, extending the lead to 46-15 at the half. The Huskies shot 76% (19 of 25) from the field, including hitting four of five from behind the 3-point line in the first 20 minutes.

It didn't get much better for the Red Storm in the second half. The Huskies finished the game shooting 65% from the field.

St. John's has lost its last six meetings to the Huskies, including a 94-62 setback on Feb. 3. St. John's was the last unranked team to beat UConn back in 2012 - nine years ago Thursday - when the Red Storm ended the Huskies’ 99-game home winning streak.

Leading scorer Leilani Correa came into the game averaging 20.9 points, but she had just two against the Huskies, making one of 10 shots. The sophomore guard had 33 points in the Feb. 3 matchup.

“UConn did a lot to take us out of what we hoped to do,” St. John's coach Joe Tartamella said. “They put pressure on us and we didn’t really respond.”

Unique Drake was one of three players with seven points to lead the Red Storm.

Bueckers also had nine assists, while making eight of her 10 shots from the field.

The entire St. John's team took a knee during the playing of the national anthem while the UConn players stood with their arms interlocked. The Red Storm have been kneeling before every game this season. ... The Huskies have won 226 straight games against unranked teams since that St. John's loss.

UConn: At Xavier on Saturday.