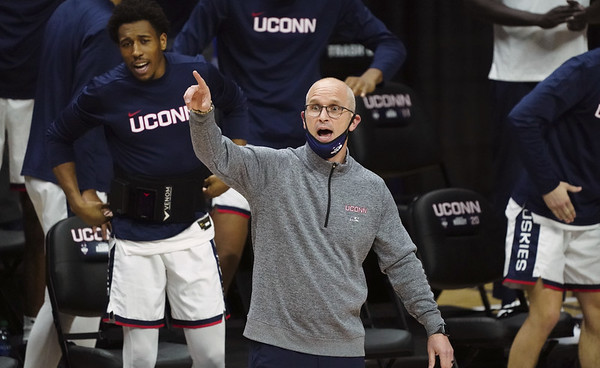 Connecticut coach Dan Hurley watches from the sideline during the first half of the team's NCAA college basketball game against DePaul. | AP Buy this photo
Published on Friday, 15 January 2021 13:47
Written by NEILL OSTROUT

The coach from New Jersey has landed another prized recruit from the Garden State.

The Huskies have two New Jersey natives already on their roster in guards Jalen Gaffney and R.J. Cole. Freshman Adama Sanogo is not a native, but went to high school there.

They also have another incoming player from the state, forward Samson Johnson, who will be joining the team this summer.

In Floyd, the Huskies are getting a “strong, powerful guard who has elite athleticism,” Dave Boff, Floyd’s coach at Roselle, said by phone Thursday.

“I think he’s a guy that can play at the highest level. He has all the things you would want, both as a basketball and as a person,” Boff said. “He checks all the different boxes. At this point, it’s about continuing to work hard.”

Floyd, who is a four-star recruit rated the 16th-best combo guard in the country according to 247sports.com, is the first player to commit to the Huskies for the Class of 2022.

Floyd ultimately chose the Huskies over Villanova and Providence, though he had offers from numerous other schools including Rutgers, Auburn and Miami.

Boff said the UConn coaches had their eyes on Floyd for quite some time.

“Danny and Kimani (Young) did a good job developing a relationship with the family and showing him how much they wanted him early,” Boff said.

UConn guard James Bouknight’s elbow surgery was not performed at the UConn Health Center in Farmington, as most of the procedures involving UConn athletes are. Instead, the sophomore went home to New York City for the operation, multiple sources told the Journal Inquirer.

UConn officials have not given an estimated timeframe for Bouknight to return to the court, but one source indicated Thursday that it is likely the Brooklyn native would be out of action for “about a month.”

Big East announced Thursday that Saturday’s game between Xavier and Seton Hall has been postponed due to COVID issues within the Xavier program.

UConn is scheduled to host Xavier on Wednesday and it’s not clear whether or not the Musketeers will still be able to make the trip to Connecticut for their scheduled game next week.

No. 25 UConn’s next game is Monday in Storrs against St. John’s.