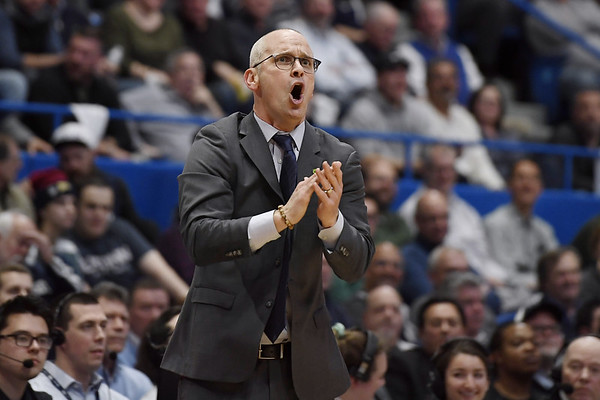 A year ago, the UConn menās basketball team benefited greatly by the emergence of a freshman wing.

The Huskies arenāt planning on seeing another James Bouknight this season - and UConn will certainly still be āBouknightās teamā in many ways during 2020-21 - but Andre Jackson expects to make a splash in his first year nonetheless.

Jackson, a 6-foot-6 standout from Amsterdam, N.Y., watched what Bouknight was able to do in first season in Storrs and says he wants to do much the same.

Jackson revealed on Friday that he had surgery on his knee ā4-5 months agoā but said his repaired meniscus isnāt a hinderance any longer and that he is practicing āliveā with his teammates now.

With a start to the season coming just after Thanksgiving - the Huskiesā schedule still hasnāt been finalized - the Huskies are thrilled to have the promise of actual games ahead.

āEverybody on the campus is just so dialed in to the game. It helps you focus, especially being in Connecticut, in Storrs, thereās not much to do so it keeps your mind on the right things,ā Jackson said.

He has yet to play a game for the Huskies but Jackson already feels he has a great feel for the history and tradition of a program that has won four national championships.

āIāve been at UConn so many times. My first time I think I saw Ray Allen and Jim Calhoun in the same weekend,ā Jackson said. āIt just electric being on campus, seeing the banners hung up on the walls, seeing the different players who came through here and made an impact, left a legacy. I feel like the nostalgia here is just as good or greater than any program in the country.

āIt creates a lot of motivation for me and Iām sure for everybody else,ā Jackson added.

As the UConn freshman began to arrive on campus in July, there was at first one notable absence. Center Javonte Brown, who hails from the Toronto area, was not among the early arrivals.

The COVID-19 restrictions at the U.S.-Canadian border was an issue, as was obtaining an I-20 student visa.

It took a few weeks but Brown was eventually able to clear both hurdles.

āOur prime minister, he opened up the borders and we thought I was going to be earlier than expected. But then the COVID numbers started going up in Canada so they had to expand the period of opening for the border,ā Brown said. āPlus we had to deal with the I-20. They were saying I wasnāt allowed to get it but thankfully I got it on time.ā

Now that heās entrenched as a UConn student and basketball player, Brown can smile a bit about his struggles to get here.

He also confirmed that UConnās move back to the Big East Conference was one of the main reasons he wanted to badly to come to the school.

āWith UConn moving to the Big East, that played a pivotal part in my recruitment,ā Brown said. āWith the Big East being close to Canada, a whole lot of family would be able to come out and see games. Now with COVID restrictions and border laws and all that, the possibility probably wonāt be there anymore. But itās close to home and itās a really good league.ā

A few of the UConn players were asked Friday what NBA player they try to emulate or model their game after. A couple of their choices should make UConn fans excited for the possibilities, but also recall a few painful memories.

Junior wing Tyrese Martin picked Jimmy Butler, the Miami Heat star who has blossomed into a superstar and helped his team to the NBA Finals this season. Of course, in his college days Butler was a noted UConn-killer. Many fans can still recall his jumper with 2.8 seconds left giving Marquette a 70-68 win over No. 19 UConn at the XL Center Jan. 30, 2010.

Brownās choice was another player who destroyed the Huskies when he was in college, former Louisville forward Montrezl Harrell.

Harrell, who was the NBAās Sixth Man of the year for the Los Angeles Clippers in 2020, might hold the record for most dunks ever against the Huskies.

Of course, the Huskies rebounded from that walloping to win a national title a month later, so the memories of Harrell hanging on the rim for an entire afternoon are a bit less painful for UConn fans.

CBS Sportsā Jon Rothstein reports that BYU has replaced Notre Dame as the fourth team in the Legends Classic, the four-team matchup that has been moved to Mohegan Sun. UConn, Vanderbilt and Southern Cal are also playing in the event. ā¦ UConn freshman Adama Sanogo says he first learned about the school and the basketball program from former Husky Kassoum Yakwe, his fellow native of Mali. Yakwe played one season for the Huskies after transferring from St. Johnās. āYou know Kassoum? He went to UConn for one year. I knew him a lot. Through him, I knew UConn,ā Sanogo said. When UConn assistant Kimani Young began to recruit Sanogo in 2018, Sanogo said, and he soon began to learn more about the Huskies.