On this day in UConn history: A double dip of national championships 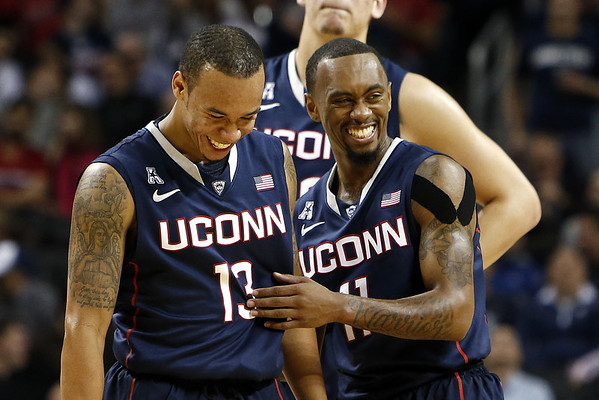 Connecticut's Shabazz Napier (13) and Ryan Boatright (11) smile during a break in the second half of an NCAA college basketball game against Maryland on Friday, Nov. 8, 2013, in New York. UConn defeated Maryland 78-77. | AP Buy this photo
Published on Tuesday, 7 April 2020 14:44
Written by Neill Ostrout and Carl Adamec

There may not be a March Madness this year, but UConn has a rich history in the NCAA menâ€™s and womenâ€™s tournaments. Here are some of the Huskiesâ€™ memorable moments.

Kevin Ollie always loved playing in Dallas. The former UConn point guard, assistant coach and head coach spent most of his formative years in Los Angeles, but technically was born in Dallas and loved returning with his Huskies.

So much so, that when the 2013-14 regular season ended, Ollie had already made plans for his team to be in the Dallas area for the Final Four, not that many outsiders shared his optimism.

Ollie was right. UConn made it all the way to the title game in Arlington, Texas, and on April 7 beat Kentucky 60-54 to claim the programâ€™s fourth national title.

UConn became one of the more unlikely champions in NCAA history. It was the first No. 7 seed ever to win the title (and denied Kentucky the chance to become just the second No. 8 seed ever to win).

Star Shabazz Napier led the Huskies with 22 points, six rebounds, three assists and three steals in the championship game. Ryan Boatright added 14 points, making five of his six shots from the field and all four of his free throws.

Tina Charles had 25 points and 19 rebounds as UConn completed a perfect 39-0 season by walloping Louisville 76-54 before 18,478 at the Scottrade Center in St. Louis for its first national championship in five years. Fellow All-Americans Maya Moore and Renee Montgomery added 18 points each.

The Cardinals made things interesting early and there were six ties and seven lead changes in the first 10 minutes. Slowly but surely, though, the Huskies wore Louisville down. UConn was ahead 39-25 at halftime and with Charles in charge the Huskies finished in style.