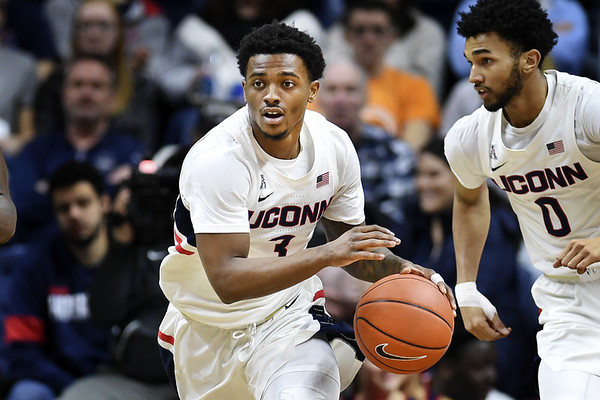 Connecticut's Alterique Gilbert (3) heads up court during the second half of an NCAA college basketball game against South Florida Sunday, Feb. 23, 2020, in Storrs, Conn. (AP Photo/Stephen Dunn) Buy this photo
Published on Thursday, 19 March 2020 20:22
Written by

Gilbert, who was honored on senior night, still has one year of eligibility after shoulder injuries limited him to just nine games over his first two seasons at Connecticut.

He lost his job as a starter in the middle of this past season but still played an average of more than 27 minutes a game and averaged 8.5 points and 3.6 assists in helping the Huskies to a 19-12 record.

Coach Dan Hurley praised Gilbert as a selfless and courageous leader who needs a fresh start.

“Al’s got a chance here to kind of use the reset button,” Hurley said. “We hope to try to help him with the process however he needs us as advisors, just to help him find the right place for him that can give him everything he wants.”

Hurley said he’s not sure if UConn, which returns four starters, will have any other roster moves in the offseason. He said he is looking at the transfer portal with an eye toward adding another player or two.

Hurley said rising senior Tyler Polley, who suffered a torn anterior cruciate ligament in his left knee in January, should be ready for the start of the 2020-21 season.

Freshman forward Akok Akok, who tore his left Achilles’ tendon in February, is hoping to be back in time for the Huskies first conference game as they return to the Big East Conference.