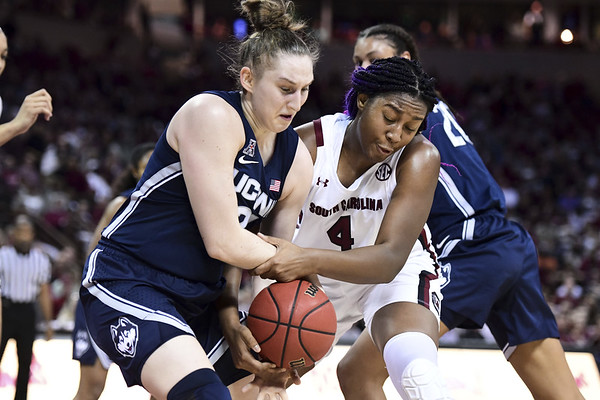 COLUMBIA, S.C. - The No. 1 recruiting class in the country looked the part for the No. 1 team in the country Monday night. The UConn women’s basketball team’s freshmen looked like, well, freshmen in their first big game in a hostile environment.

UConn’s rookies Anna Makurat and Aubrey Griffin combined for two points, six re-bounds, an assist, and five turnovers in 44 minutes in the fifth-ranked Huskies’ 70-52 loss to No. 1 South Carolina at Colonial Life Arena.

They were far from alone in their struggles but for UConn to be at its best, they need to contribute much more than they did Monday.

“I know that they’re disappointed in how they played, for sure,” UConn coach Geno Auriemma said. “Who wouldn’t be? I would venture to say ... Say we’re up seven, eight, or nine, and they’re playing. Would they play the same way? No. Now they’re in there and they have to try and win the game for us. That’s a big difference. If we’re up 10, do South Carolina’s freshmen play like, ‘Yeah, OK, everything’s fine.’ Freshmen are affected by that.

Meanwhile, South Carolina freshman center Aliyah Boston had a double-double (13 points, 12 rebounds) and freshman guard Zia Cooke chipped in 15 points and three steals. The Gamecocks’ third freshman starter, Brea Beal, added five points, including a three that capped an 11-2 run to start the second half and give the hosts a 21-point lead.

Coming off a 13-point performance in the loss to Oregon a week earlier and an 11-assist effort in last Friday’s win over Memphis, Makurat was 0-for-5 from the floor with just one assist against South Carolina.

“Their freshmen have played a huge role in their success so far this season,” Auriemma said. “There were times when their freshmen didn’t play like freshmen at all. And both of our freshmen played like freshmen the entire game. But South Carolina’s kids were like you would think they played in a bunch of these games. Those freshmen are really, really good.”

South Carolina was without one of its key freshmen, forward Laeticia Amihere. She missed her third straight game after spending the past weekend in Ostend, Belgium, in helping former UConn guard Kia Nurse and Team Canada qualify for the 2020 Tokyo Olympic Games.

UConn senior Crystal Dangerfield is among 10 on the watch list for the Nancy Lieberman Award that honors the nation’s top point guard.

Dangerfield, who was a finalist for the 2019 award that went to Oregon’s Sabrina Ionescu, is averaging 16.0 points and 4.0 assists in 21 games for the Huskies. She ranks sixth all-time in assists at UConn with 566.

FACES IN THE CROWDS

South Carolina sold about 1,000 tickets in a 24-hour span and announced a sellout at about 1:30 p.m. Monday. While far from every seat was taken, the announced crowd of 18,000 was heard.

“Their fans always come out full force and they were loud,” Dangerfield said. “There were times it was hard to hear when we were on the court. But that’s when it’s on us to make sure everybody is on the same page.”

The Gamecocks also sold out Colonial Life Arena for their games with the Huskies in 2016 and 2018. But then UConn was the top-ranked team in the country and had no trouble against the hosts, coasting to a 66-55 win four years ago and rolling to an 83-58 rout two years ago.