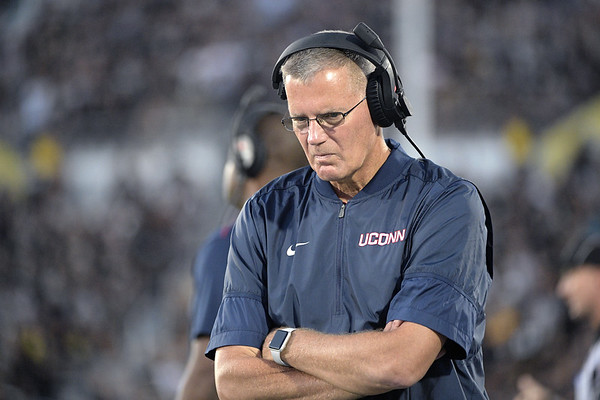 Connecticut head coach Randy Edsall walks along the sideline during the first half of an NCAA college football game against UCF Saturday, Sept. 28, 2019, in Orlando, Fla. | AP Buy this photo
Published on Tuesday, 1 October 2019 20:46
Written by NEIL OSTROUT

ORLANDO, Fla. - The UConn football teamâ€™s game against South Florida Saturday has been moved up to noon as a safety precaution that the state hopes will lower the risk of any fans contracting Eastern Equine Encephalitis (EEE).

The game, which will be played at Pratt & Whitney Stadium in East Hartford, had originally been scheduled to kick off at 7 p.m.

â€śThough the risk is low, as a precaution, we want to take any reasonable steps we can to help reduce the exposure of student-athletes, staff and the public to the illness,â€ť UConn President Thomas Katsouleas said in a statement. â€śI want to thank the conference, USF and our own division of athletics for their flexibility.â€ť

Mosquitos are most active beginning at dusk, officials say, and are a significant threat until the first frost of the season.

The game was scheduled to air on CBS Sports Network though the time change may alter those coverage plans. The school said it would announce the television coverage plans for the game later this week.

Unfortunately heâ€™s been called on to do it a number of times in his UConn football career, but Tyler Coyle has a knack for chasing down opposing ball carriers before they reach the end zone.

The junior safety is a former sprinter who despite adding weight since his days at Windsor High hasnâ€™t lost a step. He showed that Saturday night when he chased down UCFâ€™s Jacob Harris and â€śheldâ€ť him to a run of 74 yards.

The tackle, one of Coyleâ€™s team-high nine on Saturday, proved important as UCF did not end up scoring on the drive. The UConn defense held the Knights on four straight plays.

â€śItâ€™s definitely nice when you can save any points. In that case, I stopped him at like the 10 and four downs and out, thatâ€™s a good job,â€ť Coyle said.

UConn was already facing a monumental deficit when Coyleâ€™s hustle play came, but he turned on the speed nonetheless to bring Harris down.

UConnâ€™s best chances to score in the first half came on fourth downs in which it easily could have decided to leave its offense on the field.

But Edsall opted for two field goal attempts and came up empty. Clayton Harris missed attempts from 40 and 52 yards, the latter of which came just as the first half ended.

The Huskies entered the game as one of just two teams in the country without a touchdown pass this season. They picked up three on Saturday, though all after the game had been decided.

Quarterback Steven Krajewski threw a 16-yard touchdown to Cam Ross late in the third quarter, as well as a 12-yarder to Ardell Brown and a 15-yarder to Matt Drayton in the fourth quarter. Rossâ€™ and Draytonâ€™s scores were their first as college football players, while Brownâ€™s was his first for the Huskies.

Edsall said after the game that he knew his team would struggle with a schedule that was front loaded with good teams, including two Big Ten opponents as well as the Knights.

Saturdayâ€™s affair was never close, but that wasnâ€™t entirely unexpected.

â€śThatâ€™s a really good football team. They could very easily be undefeated and in the top-10. Weâ€™re not there yet. Letâ€™s not kid ourselves,â€ť Edsall said.