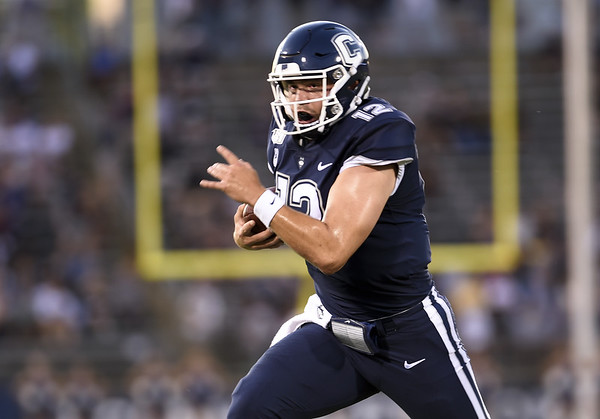 Connecticut quarterback Mike Beaudry (12) runs the ball in for the team's first touchdown of the season during the first half of an NCAA college football game against Wagner Thursday, Aug. 29, 2019, in East Hartford. | AP Buy this photo
Published on Tuesday, 1 October 2019 20:41
Written by NEIL OSTROUT

STORRS - UConnâ€™s revolving door of quarterbacks will take another turn this week, though this change is not performance based.

Redshirt freshman Steven Krajewski, who showed some promise in the Huskiesâ€™ 56-21 football loss to Central Florida on Saturday, fractured the clavicle in his left shoulder during that performance, it turns out.

Coach Randy Edsall delivered the bad news via social media Monday, saying that Krajewski would have surgery today and would be out of action for 6-8 weeks.

Grad transfer Mike Beaudry, who began the season as UConnâ€™s starting quarterback before he suffered a less significant injury, will return to the starting role when UConn plays South Florida this weekend.

Freshman Jack Zergiotis, who started three games after Beaudryâ€™s injury but who was replaced by Krajewski in the first half on Saturday, will now serve as the backup. Edsall said neither player will be available to the media this week.

Itâ€™s not clear when Beaudry was cleared by UConnâ€™s medical staff to resume playing. He was in uniform for each of the teamâ€™s last three games and Edsall said after Saturdayâ€™s 56-21 loss to UCF that Beaudry was â€śavailableâ€ť to play.

Krajewski suffered the shoulder injury on a hit in the first quarter of the UCF game, though the severity of the injury apparently wasnâ€™t clear until well after the game.

Krajewski was one of the last UConn players to leave the locker room after the game. It was apparent that he had taken some big hits in the game and he was asked about them afterwards.

â€śItâ€™s just football. I expected it. I was ready for it,â€ť Krajewski said. â€śAs far as the hits, theyâ€™re going to happen. You have to keep a level head and keep pushing.â€ť

Although he had an interception and a fumble in his first two drives, Krajewski finished the game a solid 22-of-33 for 273 yards and three touchdowns.

The Huskies (1-3) host South Florida Saturday at Pratt & Whitney Stadium. The game will kick off at noon, having been moved up seven hours due to concerns over the mosquito-borne EEE virus..

UConnâ€™s Oct. 12 game against Tulane on the Green Waveâ€™s campus in New Orleans will kick off at 3:45 p.m., the American Conference announced Monday.

The game will be aired on ESPNU.