Coaches, players grateful for chance to play as unprecedented fall sports season comes to a close 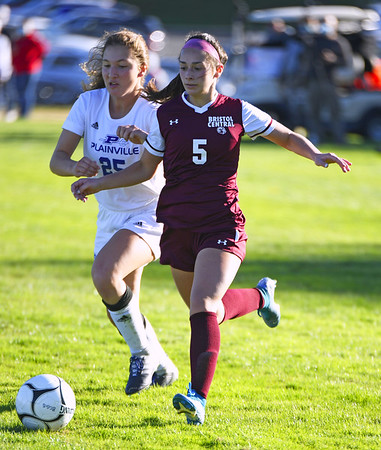 The New Britain girls volleyball team began handing in its jerseys just minutes after the teamŌĆÖs season finale, a consolation match in the CCC Region B Tournament.

After months of speculation, peaceful protests and necessary adjustments, the fall season for high school sports is already wrapping up, with final games taking place early this week. It remained an unknown if the season would happen at all due to the coronavirus pandemic, but the six-week season has reached the finish line as conference tournaments conclude.

ŌĆ£ItŌĆÖs kind of surprising, to tell you the truth,ŌĆØ New Britain girls volleyball head coach Michelle Abraham said. ŌĆ£We basically had three weeks of preseason, and there was a lot of talk that we might not make it this far. But the kids are resilient, and there have been no issues with our program. They all followed the rules. I hope for winter sports, they see that. ItŌĆÖs the adults complaining. The kids will always do what they need to do.ŌĆØ

The Hurricanes made it through the season, but that doesnŌĆÖt mean there werenŌĆÖt hurdles that arise in a season being played during a pandemic. For New Britain, all sports had to postpone its games on Nov. 5 and 6 when the high school moved to remote learning due to rising covid-19 cases, but given the bleak outlook for volleyball before the season began, back when the season was recommended to be played outdoors before wearing masks indoors was approved, a couple unexpected days off was hardly a reason for discouragement.

ŌĆ£We just focused on volleyball,ŌĆØ New Britain senior Natalia Kownacki said. ŌĆ£We didnŌĆÖt let that affect us. If there was a game, we prepared for it, and just worried about volleyball.ŌĆØ

The same could be said for the Plainville girls volleyball team, which got through the entirety of its shortened season after head coach Alle Caponigro took over the day before the season began. There were plenty of challenges for Plainville, including injuries to key starters and a roster loaded with youth, but the Blue Devils managed to evade any covid-related complications.

ŌĆ£We didnŌĆÖt have any issues, which is fantastic for us,ŌĆØ Caponigro said. ŌĆ£ItŌĆÖs crazy, because it was only a month and a half long, and weŌĆÖre already here. TheyŌĆÖre handing in their jerseys tomorrow. ItŌĆÖs crazy, but IŌĆÖm glad they got to play and got some court time and were able to see what a season looks like.ŌĆØ

Some local teams had to worry what its season would look like before it ever got off the ground. Boys soccer teams like Bristol Central were forced to postpone the first two weeks of its season after Farmington, a team the Rams scrimmaged just before the start of the season, reported a positive covid test. The reality of the pandemic was still prevalent in the teamŌĆÖs season finale against Bristol Eastern, when players and coaches from both sides were forced to quarantine out of precaution.

ŌĆ£I told them all year I donŌĆÖt know when or if we would have a next game, because thatŌĆÖs how we had to go day by day this season,ŌĆØ Central head coach Nate Jandreau said. ŌĆ£Coming towards the end, I think itŌĆÖs a little bit of a relief for some guys because you just never knew what was going to happen from day to day. But these guys just wanted to play. They earned the right to play.ŌĆØ

The overwhelming reaction from coaches and athletic directors throughout the area was one of encouragement when talking about the student-athletesŌĆÖ adherence to the safety precautions that were put in place this season. Whether it was wearing a mask on the court during a volleyball game or staying socially distanced on the sidelines, there was no defiance to be seen throughout the shortened season. But there was only so much the players and coaches could do to stay safe from any virus-related consequence. The St. Paul boys soccer team lost the final two weeks of its regular season after having a positive case within the program, then lost its postseason, along with every other St. Paul team, when the NVL canceled its postseason out of precaution. The Innovation boys soccer team also had to quarantine and missed its postseason, and was instead given one final regular season game on Monday afternoon against Aerospace. Nothing about the season was perfect, but it has reached its end without any major catastrophes.

The Connecticut Interscholastic Athletic Conference stressed the importance of ending the fall season earlier than normal due to the prospect of cases spiking again as winter approached. That precaution, much like the cancellation of winter state tournaments eight months ago, proved to be the correct one. For the players, the season didnŌĆÖt end with state tournament games, but the fact that it was able to come to a scheduled end at all was a massive relief, especially after many questioned if it would even have a scheduled start.

ŌĆ£A lot of us didnŌĆÖt expect to get this far, so to be able to do that and make more memories is really special, especially for us seniors,ŌĆØ New Britain girls volleyball senior Natalia Kownacki said. ŌĆ£We all got so close this season and became such close friends. It was awesome to have that. WeŌĆÖre going to remember it forever.ŌĆØ