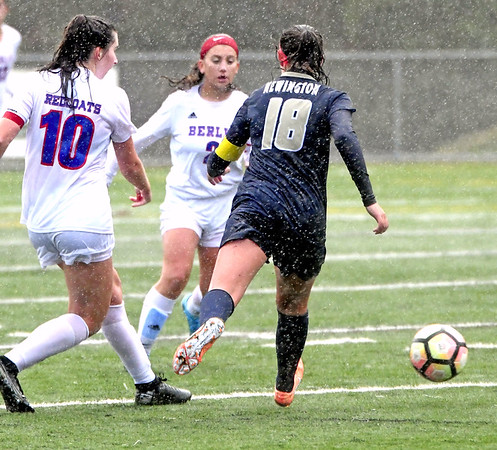 NEWINGTON - As the Berlin and Newington girls soccer teams retreated to their respective benches after the first half of Tuesday afternoon’s game, Redcoats goalkeeper Katrina Chorzepa summed up the day’s action with one revelation.

“It’s too wet to do any kind of technique,” Chorzepa said as rain continued to pound the turf at Clem Lemire.

A relentless downpour that began during warmups continued through the game, in what ended in a 1-0 win for Berlin, the second installment of what will be a trilogy this year due to the regionalized schedule. The two teams will meet again, next time at Sage Park, on Oct. 20, making it three games against each other through the first six games of the season.

Both teams are likely hoping the weather is more humane for that matchup.

“I told the girls before the game that it was going to be an ugly game,” Newington head coach Adam Wilkinson said. “The conditions really didn’t suit a pretty game of soccer.”

As the rain continued in a downpour, players could be seen wringing out their uniforms when the game action moved to the opposite side of the field. Players waiting to sub in stood frozen near the middle of the field, arms crossed and hands tucked into their sleeves in an effort to create any form of shelter. Berlin head coach Alex Joslyn tried encouraging his team to adapt to the elements when he saw too many passes on the offensive end, which would be effective only in normal conditions.

“It’s a monsoon for crying out loud,” Joslyn shouted to his team. “Just shoot the ball.”

Carly Grega internalized that battle cry in the first half, providing the only scoring of the game when she took a pass from Jenna Zup and easily deposited it into the back of the net, getting a crucial goal on a sluggish afternoon where scoring was certain to be a difficult ask given the conditions. It was Grega’s third straight game with a goal and Zup's third straight game with an assist.

“I think getting that first goal was really important to set the tone for the rest of the game and show that we were here to win,” Zup said.

Grega’s open shot came while Newington’s defense was caught in a moment of confusion, looking to the sidelines for guidance on a play they argued should have been ruled offsides, but it didn’t change the ruling on the scoreboard with just under 20 minutes to play in the half.

“The early goal, Alex and I were discussing if it was offsides or not, but in the end, it doesn’t matter,” Wilkinson said. “It’s still a goal.”

Newington (2-2-1) tried to find the equalizer through the wall of raindrops still falling in the second half, when Gabriella Stolfi tried to settle down a loose ball in front of the net, but couldn’t get her full power behind the shot, and the bouncing ball was smothered by a diving Chorzepa. Fifteen minutes later, Newington had another chance when Olivia Mullings sent a through ball to Olivia Bernier, but Bernier’s sharp-angle shot was easily turned aside.

Berlin had a chance to extend the lead in the final 10 minutes of play on a free kick from Ashley Wenzel from 30 yards out, but it banged off the crossbar. Still, Grega’s lone tally was enough on a day where passing and creating opportunities was especially difficult due to the elements.

“With these conditions, it’s not really easy to use our technical skills on the field,” Grega said. “It’s almost luck of the draw where the ball goes. It just came down to effort.”

Fortunately for the Redcoats, luck was on their side early, and the weather coupled with another stingy performance on the defensive end (the team has now allowed just two goals in its last five games) helped keep Berlin (3-0-2) unbeaten so far this season.

“It was insane,” Wenzel said of the game’s conditions. “I’ve never played in something like this. It just never let up. It was downpouring the entire time. But it was fun; as long as we get to play.”