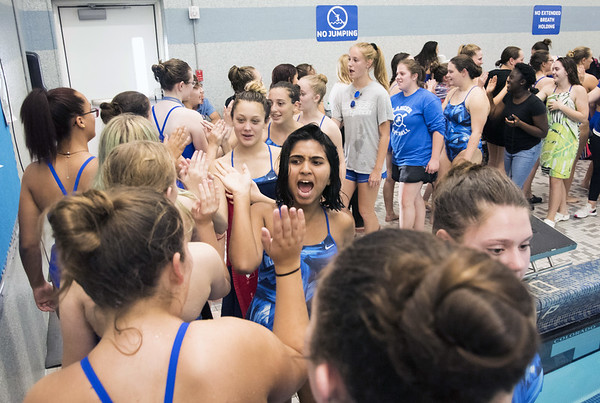 Bristol Eastern girls swimming at Southington on Wednesday evening at the Southington YMCA. Swimmers from both teams line up at the end of the meet. Wesley Bunnell | Staff Buy this photo
Published on Tuesday, 15 September 2020 10:17
Written by RYAN CHICHESTER

High school sports havenâ€™t carried a sense of normalcy since early March, before the covid-19 outbreak swept through the state and the nation, leading to winter sports state tournaments being canceled on March 10, and there havenâ€™t been competitive high school sports in Connecticut since.

For now, full-contact football remains canceled, but all other fall sports are gearing up for a delayed and shortened season to begin on Oct. 1, which will mark the first day of high school sports competition in nearly seven months. Of course, as covid-19 continues to be a harsh reminder for caution, many of these fall sports will have a much different look when seasons begin in two and a half weeks. Letâ€™s run down all of the changes and mitigation strategies that will be in place once the season is up and running.

Certain strategies are already in place, like only small cohorts being allowed to work out together until this weekend, when full team practices will be greenlit. But even when games, matches and meets get underway, the sports will look a lot different. Hereâ€™s how:

The girls swimming season could pose some of the biggest changes, aside from football, which still has the possibility of turning into a 7-on-7 season. But in the pool, the Connecticut Interscholastic Athletic Conference is suggesting major changes for one of the only indoor fall sports, including the possibility of virtual meets.

â€śVirtual meets can be useful in keeping kids separate, providing an option for teams located geographically far from each other, and for giving kids the chance to compete against a greater variety of other teams,â€ť the CIAC said in its updated girls swimming packet for the 2020 season. So, how would a virtual swim meet work? One of the CIACâ€™s initial recommendations in the packet includes having an official at each location, with both teams swimming at their home pool, and the officials score the meet like a normal one, only each team would have their respective pools to themselves, and the swimmers/divers would be unable to physically see their competition. The CIAC, noting that many schools may have difficulty regularly using a home pool, suggests another alternative where the home team swims in their pool directly after school at 3 p.m. and logs their times, then the visiting school arrives at the same pool at 6 p.m. for their events, and the scores are compared virtually to determine the winner. There is also a suggestion in the packet that includes visiting teams bringing only their top swimmers to the visiting pool to limit crowding as much as possible, and have the rest of the swimmers compete virtually.

For an indoor sport like swimming, the CIAC is recommending that no spectators be allowed in for swimming events.

Fans will be allowed to attend field hockey games, but the CIAC recommends they be no less than 12 yards from the field of play. Other mitigating strategies include eliminating handshakes at the end of the game and other celebrations like hugging, use of electronic whistles for referees, and urging players to bring their own equipment while consistently sanitizing game balls and any other equipment that may be handled my multiple players/coaches/officials.

Soccer will have very similar mitigation strategies to field hockey, including the elimination of handshakes before and after the game, and frequent sanitizing of game balls. Players will be asked to bring their own towels and water bottles, and officials should keep a distance of at least six feet when carding or talking to a player or coach. Also, when players are preparing to sub into the game, they should do so closer to the center line to keep a safer distance from officials and teammates.

Volleyballâ€™s most obvious and glaring mitigation strategy will be the latest addition, the inclusion of masks being worn by student-athletes during play, which helped the CIAC gain the Department of Public Healthâ€™s approval to hold the season indoors (DPH initially recommended the sport be moved outside or postponed to spring, which the CIAC quickly realized would be difficult to schedule and find necessary venues). Like swimming, the CIAC recommends that no spectators be allowed in for matches, and there will be no locker room availability, meaning players should arrive and leave in their game uniforms.

The handshake greeting at the net prior to matches wonâ€™t happen this fall, instead players will arrive at the 10-feet line when introduced as starters, and will wave to the other starters. Teams will not be switching benches in between sets this year, and players will be asked to keep a distance of six feet from each other on the bench, and in the likely event that more room will be needed to satisfy distancing guidelines, rows of seating should be made available behind team benches. There will also be no line judges for the 2020 season, meaning calls at the back line will be made by the officials at the net.

Aside from the start of races, when runners are bunched together, cross country presents some of the lowest risk in terms of covid-19 spread, but there are still some strategies being put in place for precaution. The CIAC recommends no more than 50 competitors at the start line, with teams being spaced six feet apart prior to the start of the race. To satisfy this, the number of teams competing in a meet, or the number of runners per team, could be limited.

Numbered finish cards and/or sticks will be permitted, but only if they are dispensed by masked officials and promptly discarded after recording their finish time. As for spectators, the CIAC notes that the lowest risk would be for there to be no spectators, but allowing one spectator per runner could also be considered. There should also be clear markings for where spectators can watch the race.