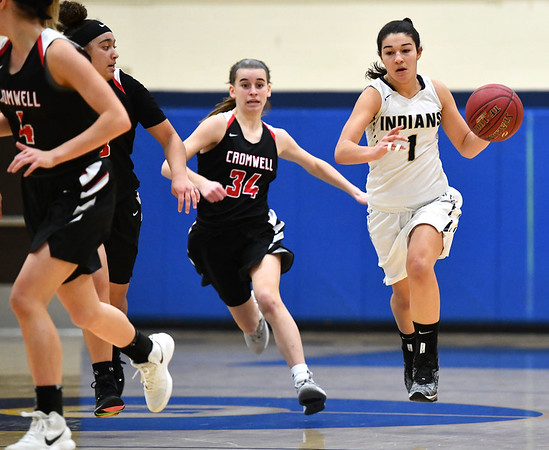 NEWINGTON â€“ Through the first three quarters of Saturday morningâ€™s contest with Cromwell, the Newington girls basketball teamâ€™s shooters looked like they might have slept in.

The Indiansâ€™ normally fluid offense labored early on against the Panthers, shooting just 6-for-23 from the floor in the first half while being held scoreless through the first five minutes of the third quarter.

But after hitting the snooze for three quarters, Newington came alive, rattling off a 15-2 run to start the fourth and come away with a 50-39 victory, the teamâ€™s fifth in a row.

â€śWeâ€™ve always picked it up in the second half,â€ť head coach Marc Tancredi said. â€śIt took us a little longer this game, but we really stepped up our level of play in the fourth quarter.â€ť

The Indians (15-2) entered the fourth leading by just three, but their decisive run helped the team pull ahead by as many as 17 to make up for a lackluster offensive effort early on.

â€śI was a little disappointed in terms of our mentality coming out today,â€ť Tancredi said. â€śYou could make the excuses of an early-morning game, but you have to come out and play. Weâ€™re a 14-2 team, and I wish we came out with a little bit better of an effort this morning.â€ť

The Indians looked wide awake at the start, forcing two turnovers on the Panthersâ€™ (11-6) first two possessions, the latter leading to a 3-point play for Ashanti Frazier to give Newington the early lead. Another bucket by Frazier and a driving layup from Sabrina Soler helped bring the lead to 8-0 and force a Cromwell timeout. But Sadie Budzik came out of the timeout and willed the Panthers right back into the game by scoring five straight points, including a corner three, to cut the deficit to 8-5, and Newington failed to pull away again until the fourth quarter.

â€śI think we got comfortable,â€ť Tancredi said. â€śCromwell is a good team and made adjustments, and we didnâ€™t adjust to their adjustments. We found ourselves in a ballgame.â€ť

The Indians carried a four-point lead into the second quarter, and after neither team scored through the first 3:15 of the period, Soler picked off a pass at Cromwellâ€™s free throw line and drove the length of the floor to finish with a lefty layup and push the lead to six. The Panthers came back down the other end and got a 3-point play from Marykate Sullivan to pull back within three and stay within four heading into the break.

â€śI think we let teams get comfortable, and then we put ourselves in these positions where we have to dig our way out,â€ť Frazier said after scoring a team-high 20 points. â€śWe have to figure out how to push the gas pedal and keep going.â€ť

Newington continued to struggle offensively to start the third, while Cromwellâ€™s Vanessa Stolstajner drained five straight points to give the Panthers a 21-20 lead with 4:08 left in the quarter. Frazier responded with a three one minute later to give the Indians their first points of the quarter and the lead back, and a turnaround jumper by Frazier with 20 seconds left in the period extended the lead to three entering the fourth.

The Indians opened the fourth with a quick basket from Alexie Armour to push the lead to five, and another from Frazier with 6:02 left gave Newington a seven-point cushion and prompted a Cromwell timeout. Frazier went right back to work out of the timeout, coming off a screen and burying a jumper from just inside the 3-point line to give the Indians their largest lead of the game at nine, as Newington knocked down its first three shots from the field following a rough stretch of inefficiency in the second and third quarters.

The Indians continued to pour it on and make up for the flurry of misses earlier in the contest, as Armour and Soler teamed up to score back-to-back buckets in transition to push the advantage to 11 and force another timeout from the Panthers, who suddenly had so answer for a Newington offense that was held in check through the first 24 minutes of play.

Karissa Zocco, held to just two points through three quarters, blew the game open with a corner three with just under three minutes remaining to give the Indians a 17-point lead and cap off a 15-2 run to open the period.

â€śItâ€™s important to start every quarter as strong as possible, but it was so important for that fourth quarter, because we were down,â€ť Frazier said. â€śWe werenâ€™t losing, but we were down mentally. We hit a couple buckets and we were back in it.â€ť