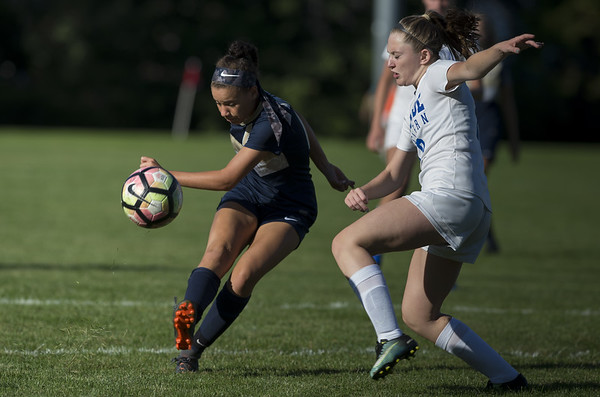 NEWINGTON - The Bristol Eastern girls soccer team tried to contain Newington as long as it could, but after a hard-fought first half, the Lancers’ defense finally gave in to a relentless offensive attack.

The Indians scored twice in the opening minutes of the second half, quickly turning a 1-0 lead into a 3-0 advantage, only to score twice more in a 5-0 rout that saw five different Newington players find the back of the net.

“I thought our defense hung I there in the first half, but we didn’t win enough balls,” Eastern head coach Scott Redman said. “When we won a ball, we kicked it right back to them and they were coming back down our throats. The chances were extremely lopsided.”

Possession was dominated by Newington from the early going, starting in the opening minutes of the first half when Olivia Mullings weaved through a trio of Lancers defenders in the box before getting off a good straightaway shot, but Lancers goalkeeper Maura Cyr was perfectly positioned to make the save.

Eastern responded with a chance of its own following a deflected free kick that resulted in an odd-man rush, but a centering pass floated just out of the reach of a leaping Taigan Parent, who chased down the loose ball and fired a tough angle shot that was smothered by a diving Ella DePase, who pitched a shutout for Newington.

“I think the goal from Olivia really helped settle us down,” Newington head coach Adam Wilkinson said. “We addressed a few things at halftime and they came back out and played really well.”

Newington wasted no time padding its narrow lead to start the second half, scoring 31 seconds in on a high-arching shot by Reese Sadler from 20 yards out that sailed just over the outstretched arms of a leaping Cyr to give the Indians a 2-0 lead.

Newington continued to pour it on minutes later, when Emily Chojnicki fielded a pass just inside the box and turned and ripped off a shot that tucked just inside the pose to stretch the lead to 3-0 with 32:35 left in the second half.

“They moved the ball very well in the second half,” Wilkinson said. “We tried to play as quick as we could.”

The quick chances kept coming for the Indians following Chojnicki’s goal, but shots by Mullings and Olivia Bernier both clanged off the post. Eastern tried to break the shutout shortly after on a breakaway by Emily Nelson, but her shot rolled into the waiting hands of DePase in net.

The Indians tacked on another with 14 minutes left, when Giuliana Stolfi buried a shot from way outside and curled it just inside the post to make it 4-0 Newington, with each goal coming from a different source.

“We’re working together, and it’s great to see everyone get in on it,” Mullings said of the generous distribution of goals on Monday. “It’s really exciting.”

The trend continued with 6:30 left, when Cassidy Gilchrest had a deflection land right in her lap before turning to send a roller into the net with 6:30 left to make it 5-0 and end a ruthless second-half barrage.

“We knew coming in we’d have less chances of them, but we gave them too much time in space,” Redman said. “We played too nice today.”