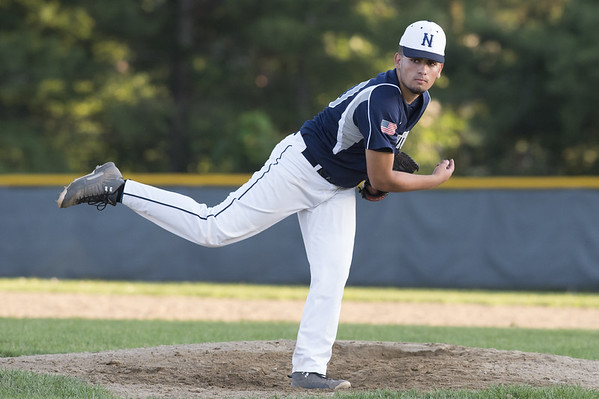 NEWINGTON - Simao Cabral‚Äôs arm was aching. After being away from a pitcher‚Äôs mound for two weeks due to injury, Monday‚Äôs starter for the Newington American Legion baseball team wasn‚Äôt sure if he could finish out the seventh inning against Bristol.

At least he wasn‚Äôt physically sure.

Emotionally, Cabral wasn‚Äôt coming off the mound. Not with a 9-3 win just three outs away and not on what would likely be his last competitive baseball game.

And especially not with his mother, Maria, in the stands, watching her son pitch one last time before returning to Portugal to be with the rest of her family, who is set to care for her as she dealt with an aphasia diagnosis, an early form of dementia considered terminal. Cabral, who would be joining his mother on the trip to Portugal before returning to the United States, was pitching his last game for Newington, and he wasn‚Äôt about to give up the ball until the final out was recorded.

‚ÄúI popped a few Advil‚Äôs to cover me,‚Äù Cabral said, ‚ÄúThis was my last game. Everyone else here might never see [my mother] again. So I wanted to do this for her. I love her, and this is all for her. Everything I do is for her.‚Äù

Maria, who watched from the top row of the bleachers, struggles to put together full sentences as her condition worsens, but she didn‚Äôt need words on Monday afternoon. Nobody did. They just needed their eyes to watch Cabral toss a 1-2-3 seventh inning to finish a complete game victory. Everyone in the stands and the dugout knew who the farewell performance, and everything that preceded it, was for.

The season that Cabral dedicated to Maria almost never happened. In the spring of 2018, when Cabral was cut from the Newington high school team as a junior, Cabral noticed that his mother was struggling to put sentences together. By autumn, when Cabral was deciding whether to give the high school team another try for his senior season, her condition worsened, and she was soon diagnosed with Aphasia, which affects parts of the brain that control language and communication. With his mother fighting a terminal illness, Cabral wasn‚Äôt sure if he could fight for a spot on Newington‚Äôs roster. Regardless of his decision, Newington high school head coach Ben Alaimo made sure Cabral knew the Indians were in his family‚Äôs corner.

‚ÄúI was talking to [Alaimo], and me and him, even after last season, we‚Äôve always had a great bond,‚Äù Cabral said. ‚ÄúI told him what was going on with my mom and he told me he was behind me no matter what, regardless if I was on the team or not. Before I told him all of this he told me he wanted me to try out again.‚Äù

It was a tough decision for Cabral, until he thought about what another of season in the sun would mean for his mother, who would soon be heading back to Portugal as part of a family decision. The spring and early summer months would be Cabral‚Äôs last days with Maria until at least Christmas, when he would be able to visit her again. That made his decision an easy one.

‚ÄúA few weeks before tryouts, I didn‚Äôt know if I wanted to come back and play,‚Äù Cabral said. ‚ÄúBut then all of this stuff was happening with my mom, and I decided it would make her happy if I came out and played. She‚Äôs seen me play all my life, and I felt like it would be one last thank you to her.‚Äù

After falling short his junior year, Cabral entered tryouts for his senior season with much more to play for, and it showed. Cabral was back on the high school team after making the cut, and continued to play into the legion season despite the knowledge that the season would be cut short for him after Monday‚Äôs game against Bristol. That didn‚Äôt matter. Cabral wanted to give his mother every chance to watch him play before she wouldn‚Äôt be able to anymore, so he did whatever he could, all the way through the last pitch in the last inning of his last game.

‚ÄúBaseball is a funny game,‚Äù Newington legion head coach Bill DeBlasio said. ‚ÄúIt can bring people together. With all the stuff he has going on he stayed committed to the team. That‚Äôs just awesome.‚Äù

The commitment wasn‚Äôt always easy. Visits to the doctor with his mother caused him to be late for a number of games and practices throughout the spring and summer seasons, but his understanding coaches and players made sure his time on the diamond was as easy and enjoyable as possible, while Cabral made sure his mother was enjoying herself in the stands. Even as his fatigue grew on Monday, Cabral was finishing his last game no matter what transpired on the field. What mattered to him was up in the bleachers, and he was going to make sure he walked off the mound to see a smile on his mother‚Äôs face.

‚ÄúIt was hard,‚Äù Cabral said. ‚ÄúI just pushed through it, because I knew I loved baseball and I love my mom. I love the way she looks when I‚Äôm playing. I did it for her. She‚Äôs helped me so much. Just having her here at my last baseball game meant the world to me. Especially after all we‚Äôve been through.‚Äù

There will be more fights for Cabral and Maria as she continues to battle Aphasia in Portugal, but on Monday afternoon in Newington, Maria‚Äôs terminal illness wasn‚Äôt weighing on the Cabral family. They were too busy finishing a final chapter in Cabral‚Äôs baseball career that couldn‚Äôt have been written without his mother‚Äôs guiding hand, who he believes helped him through every pitch of his complete-game win.