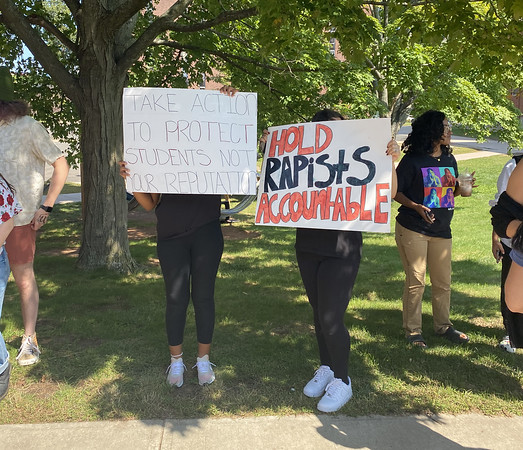 “As a victim of an assault on campus, I feel as if women should get justice for these men who commit rape,” Colannino said at the protest Friday.

According to Colannino, this was her first protest, and the event was well organized.

“To me, the goal of this protest is to stop sexual violence on campus and in New Britain in general,” she said.

Rhiannon Grimmett, a Central student, said she had many friends attend the protest and did not want them to suffer.

“I have been a student here for five years, and [sexual violence] is just swept under the rug,” Grimmitt said. “If I can be here to support people, that’s what I want to do.”

Grimmett said she was impressed there was a protest on short notice. She said the impact and power of the people are essential.

“I couldn’t be more thankful to see so many people here,” she said. “This may be a really difficult experience for people, and there need to be more policies in place to protect our survivors.”

Central student Liam Chenette said speaking up for the student victims is vital.

“If we all stand together, we can truly make a change,” he said. “No matter how high up you are in power, you should be held accountable for rape.”

“I strongly feel that this should be a place where students can feel like this is their second home,” Deonarine said. “They shouldn’t have to feel nervous or overly stressed to come to campus and worry about whether or not they’re going to feel threatened or attacked.”

Deonarine said the protest is to make faculty more aware of the sexual violence on campus.

“We’re finally lifting that carpet to show them the dust,” she said. “It is messy.”

According to Deonarine, no student should have to face victim blaming or be afraid.

“It’s just scary all around, and the accused should be willing to cooperate with the right people or at least give the victims closure,” she said.

Deonarine said she’s had “great memories” at Central but feels “disheartened” about the sexual violence on campus.

“I was walking on campus thinking nothing was wrong, but now knowing that my fellow students and perhaps classmates have dealt with such a horrid experience. It kind of leaves a heavy heart on me,” she said.