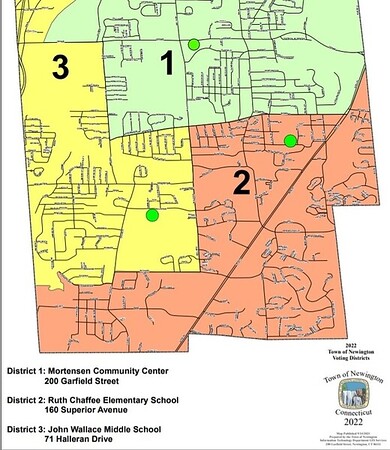 Courtesy image | A map of Newington's new proposed voting districts, a reduction from eight districts to three. Buy this photo 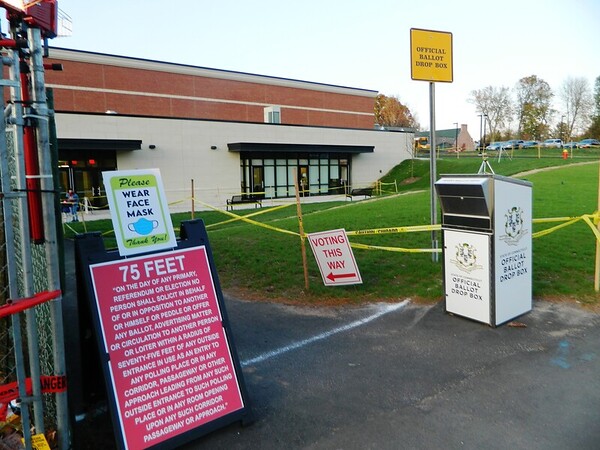 Erica Drzewiecki | Staff -- The entrance into the polling station at the Mortensen Community Center during a past year's election. Buy this photo

NEWINGTON – A controversial change that could impact voters in town was met with heavy opposition this week.

The Newington Registrars of Voters has proposed reducing the number of voting districts from the current eight to three. This came after the 2020 Census was completed and State Assembly districts were redrawn, so the 20th and 27th are the only to fall within Newington’s borders.

“This was a shock when I heard it; it will change where people currently vote and have been voting in Newington for a very long time now,” State Rep. Gary Turco of the 27th District told the Herald this week. “I can say with confidence this drastic reduction would be bad for the town.”

“While the proposal may be a well-intentioned attempt to save money,” Lesser said, “it’s practical effects would be radical and unjustified by any practical benefit.”

He addressed the issue at the Town Council’s regular meeting Tuesday night. The main concerns raised by community members included access to voting by non-drivers who used to walk to their polling place, along with traffic, long lines and limited parking.

“I think we should continue to do as we have for 50 years,” Marc Frantz said, predicting “mass chaos.”

Pat Lang criticized the town for considering such a dramatic change in residents’ voting rights.

“I did not realize I had moved overnight to Georgia,” she said. “The State of Connecticut already has the most restrictive voting in the country, especially regarding absentee ballots. Do we really need more restrictions at this time?”

Carole Mulready, from the League of Women Voters of Greater Hartford, asked the town to consider the potential impact to voters.

“You have to be very careful when you reduce access to voting,” Mulready said. “While the reduction in sites may appear to have a tax benefit it is very crucial to examine the unintended consequences that can occur even with the best intentions.”

Democratic Registrar Marie Fox and Republic Registrar Theresa Avey spent over a month working on the plan for officials’ consideration.

“The only way we come to move the town forward is to bring ideas that could advance us and discuss them at the table,” she said.

According to Avey and Fox, the consolidation of districts would save the town a little money, simplify the tabulation of votes and not require as many poll workers.

“There is a huge staffing issue to run an election,” Avey said. “By reducing the districts you are reducing the number of moderators, tabulators, ballot clerks and official checkers.”

While more people would be coming to each polling place, the state requires a minimum amount of voting booths depending on how many voters there are per district. Newington already has extra booths that could be utilized. Referendums and primary elections would take place at one of the three sites.

“We are not trying to be racial, hold back or suppress voters,” Fox said. “I love every single one of my voters. We work for them.”

Anyone who needs a ride to the polls has always been accommodated, she added.

Councilor Mitch Page brought up the possibility of voter fraud, as seen in states with more restrictive voting practices.

“Democracy is a need, it’s not a want. We can’t compare budget savings to suppressing voters,” he said, adding, “I think this is ridiculous we’re even having this conversation. It is a shame to waste our time on a very bad idea.”

“This presentation is not political,” he said. “If it’s determined by the Council that it’s not something you want to do then no harm done…but if it was never presented to you and you didn’t have a chance to make a decision then we wouldn’t be doing our jobs.”

The discussion is expected to continue at the Council’s next meeting Jan. 25 and a public hearing is tentatively scheduled for Feb. 8.