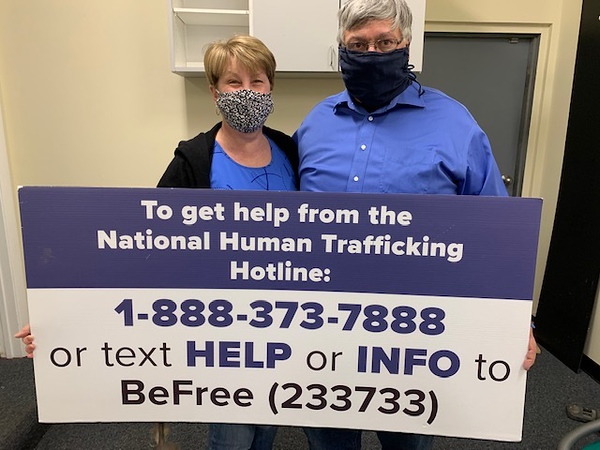 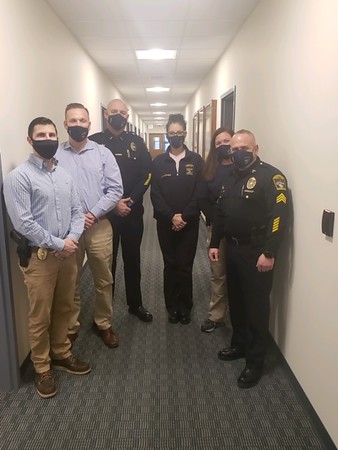 Courtesy photo | Newington Police sport the blue today and every day, but here in honor of National Human Trafficking Awarness and #WearBlueDay. Buy this photo

NEWINGTON – Sex trafficking is a problem that extends well beyond the Berlin Turnpike to the far reaches of the globe, but local residents are doing something about it here and now.

On National Human Trafficking Awareness Day Monday, people posted photographs to social media of themselves and others dressed in blue in recognition of the U.S. Department of Homeland Security’s movement, #WearBlueDay.

Leading these efforts locally was Newington Rotary Club’s Stop the Traffik Committee, which invited groups and individuals from the community to take part and spread the word about the horrors of modern slavery.

“Unfortunately with COVID happening we can’t have any face-to-face contact, but I’m hoping by the end of the day I’ll see a lot of photos posted on Facebook,” Chairman Dave Tedeschi said Monday morning.

In 2012 the U.S. government declared January National Human Trafficking Prevention Month. On Jan. 11 state and federal organizations take the opportunity to promote the cause at conferences, fundraisers and special events. This was a challenge in 2021 due to the pandemic and most of this awareness was alternatively performed virtually this year.

Newington Police Department joined in the movement by posting a graphic to its Facebook page Monday, #WearBlueDay. “Today, January 11th, 2021, wear blue, take a selfie and attach it to this post to call attention to this horrible crime,” the post read.

Tedeschi started Stop the Traffik back when he was President of Newington Rotary in 2018. Now Assistant Governor of Rotary’s District 7890, he has led many different initiatives to combat trafficking and help survivors.

Human trafficking is defined as exploiting a person through force, fraud or coercion. According to the International Labor Organization, 40.3 million people are being victimized by human trafficking around the world, at any given moment. About one-quarter of them are children.

Sexual trafficking is one of the largest sectors of forced labor. Federal law treats anyone under the age of 18 who is involved in commercial sex as victims of human trafficking. They hail from every county in Connecticut, in both rural and urban areas, and the youngest of 200-plus minor victims assisted by DCF in the last few years was just two years old.

The Connecticut Department of Children and Families (DCF) as well as the Connecticut Institute for Refugees and Immigrants (CIRI) both promoted the #WearBlueDay movement in their circles. CIRI established Project Rescue in 2006, which provides trafficking victims in Conn. with referrals to service providers, legal aid, case management and advocacy services. Just this week, CIRI began its first Facebook Live Series for National Slavery & Human Trafficking Prevention Month, featuring several events. Check out the series at facebook.com/ciri.ct

Stop the Traffik is planning events around the international #EndItMovement this February. Last year committee members visited the library and even the State Capitol to share the facts on human trafficking.

“We’re really going to try to get more colleges, schools and businesses on board this year,” Tedeschi said.