A look back at the top stories in Newington in 2020

Erica Drzewiecki | Staff Inside the main corridor of the new Newington Town Hall, completed in summer of 2020. Buy this photo 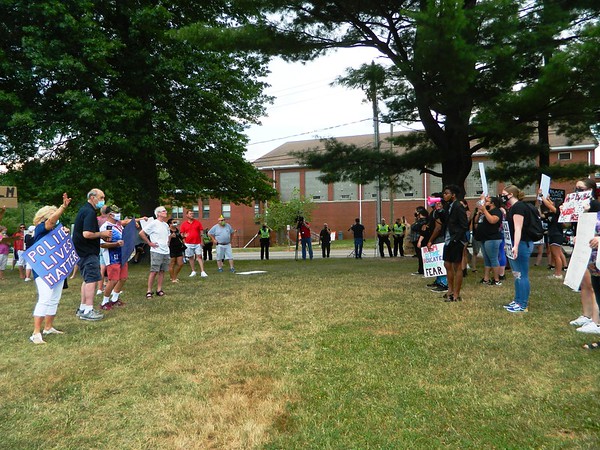 Erica Drzewiecki | Staff Opposing protesters shout at each other during a rally in Mill Pond Park July 22. At left, Police Lives Matter supporters and at right, members of the Black Lives Matter movement. Buy this photo

Erica Drzewiecki | Staff A sign posted outside the VA Hospital in Newington, which was closed to visitors as the coronavirus pandemic persisted. Buy this photo

Without a shadow of a doubt, the last twelve months marked a momentous year in the townŌĆÖs history. While the covid-19 pandemic tinted nearly everything - closing schools, shuttering businesses and sickening residents - Newington still had other business to tend to and so it did.

Town infrastructure was at the top of the priority list, with the culmination of one of the most significant building projects in the last few decades and the kick-off of another. Social and racial tensions also came to a head, dividing bands of local residents and bringing others together. As autumn ushered in falling leaves and election campaigning, Newington bid a somber but majestic goodbye to a former police chief.

HereŌĆÖs our breakdown of 2020 as it was in Newington, with a focus on the top five most notable stories.

The year did not have much chance to develop before the novel coronavirus made its way into the country, the state and then, Newington. Around the tenth of March Town Manager Keith Chapman made the fateful decision to close town facilities and cancel non-essential activities in order to protect the community from the newly-emergent illness claiming deaths across the globe.

ŌĆ£The town is very well aware of the challenges residents and businesses are facing right now,ŌĆØ Chapman said at the time. ŌĆ£WeŌĆÖre trying to meet the needs everyone has the best we can with the challenges weŌĆÖre facing.ŌĆØ

Schools closed, challenging teachers and students to move into a virtual learning platform for the remainder of the spring semester.

As the pandemic tested their sanity and strength, a social movement tested residentsŌĆÖ personal convictions.

On June 4 hundreds of people took to the streets of downtown to protest the killing of George Floyd and demand law enforcement accountability. ŌĆ£I think itŌĆÖs a beautiful thing when a predominantly white town like this one can come together and acknowledge the system we live in is flawed,ŌĆØ resident Deven Perez said during the event. ŌĆ£IŌĆÖm here to spread the love by protesting the social injustices people of color have to face every day.ŌĆØ

More than a month later on July 22, two opposing groups gathered in Mill Pond Park to protest once again. Word had spread that Black Lives Matter supporters would be advocating to ŌĆ£defundŌĆØ police and police supporters came out to defend local officers. ŌĆ£If we de-fund our police, the whole world would be in chaos,ŌĆØ Joe Cirigliano said, holding up a sign that read ŌĆ£PLMŌĆØ for Police Lives Matter.

Come July, town staff moved operations into their newly-built Town Hall and Community Center. The $31.1 million, 72,000 square foot facility was designed by QA+M Architecture and built by Downes Construction, with the help of the Town Hall Project Building Committee. The project jumped hurdles that included winning votersŌĆÖ support, budget hikes and even a lawsuit.

The new facility represented a bright accomplishment for Newington during an otherwise difficult year. Parks and Recreation Superintendent Bill DeMaio was particularly enthused by his departmentŌĆÖs new headquarters, saying, ŌĆ£ItŌĆÖs going to put Newington on the map for having one of the nicest indoor sports facilities in the state.ŌĆØ

Retired Police Chief Richard KlettŌĆÖs last week of life was a sad one for Newington, as nearly everyone, it seemed, had been touched by the work and spirit of the man they came to know as ŌĆ£Mr. Newington.ŌĆØ Klett, 75, also former chief of security and residency for Newington schools, passed away Oct. 2 after a short battle with stage four cancer.

His wife, Maureen Klett, and their three adult sons joined Newington Police in burying him with military honors as he had also served as a U.S. Army captain in Germany and Vietnam. ŌĆ£He had a beautiful ending surrounded by everyone who loved him,ŌĆØ Maureen told the Herald a few days later. ŌĆ£I want to thank everybody, from the bottom of my heart, for the love and support theyŌĆÖve shown to Rich and our family.ŌĆØ

The Town of Newington went on to dedicate Garfield Street as a memorial roadway in KlettŌĆÖs honor.

As 2020 neared its end, Newington voters put their stamp of approval on a $35.5 million plan to renovate Anna Reynolds School. Parents campaigned the cause at town meetings beginning early on in the year, pushing the project to a November referendum where it passed with an overwhelming favorable vote.

Built in the ŌĆÖ50s and riddled with problems, Anna Reynolds is now slated to receive a top-to-bottom renovation with state funding assistance expected at a reimbursement rate of about 50%. It was the communityŌĆÖs persistence that brought this project to fruition, according to Superintendent of Schools Dr. Maureen Brummett.

ŌĆ£When the school was having substantial leaking and odor problems last January, parents came out and told the town, this is not okay, weŌĆÖre tired of it,ŌĆØ she remembered. ŌĆ£The results of the referendum speak to the commitment of the community and the real difference parents can make.ŌĆØ