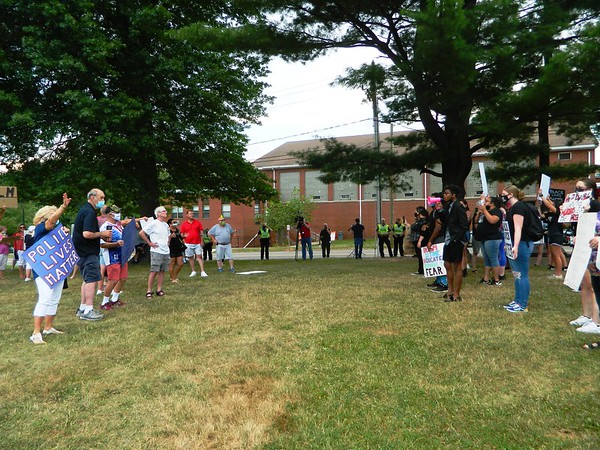 When word spread that Black Lives Matter supporters in Newington would be advocating to “defund” police in Mill Pond Park, another group of residents came out to protest the protest and support the Newington Police Department.

“If we de-fund our police, the whole world would be in chaos,” Joe Cirigliano said, holding up a sign that read “PLM” for Police Lives Matter.

“I’ve been a Newington resident for 53 years, and I have the utmost respect for our cops,” he added.

Newington Police stood at the edge of the park, watching, listening, and making sure protestors remained peaceful and activities did not get violent.

Republican Town Councilor Mike Camillo, who is running for State Representative of the 27th District this November, came as a private citizen backing police.

“I’d like the police to know we support them; that’s why I’m here right now,” he told the press.

Meanwhile, down by Mill Pond Falls, the protest organized by town residents Taylor Dempsey, Thomas Connors and others was taking place.

Dempsey, an outspoken activist who says she is proud to “troll” racist and prejudiced social media users, shared stories of experiencing racism in Newington.

“I’ve been personally attacked,” Dempsey said. “Anyone who says there’s no problems in this town is very wrong. There’s a whole lot of racism in Newington.”

As a teaching assistant in West Hartford Public Schools, she’s been keeping busy during her summer off from work.

“I’ve got a lot of ambition, a lot of energy,” Dempsey said. “If every single person isn’t weaponized as an active anti-racist we’re not going to get anything done.”

As promoted on a flyer distributed before the event, the group also came to support LCO No. 3471, “An Act Concerning Police Accountability.”

A piece of legislation introduced by state legislators last week, the proposed bill has put forth a number of changes to police operations, in regards to certification, excessive use of force, crime reporting, bias and more.

Newington resident Aaliyah Taylor held a sign suggesting police be “de-funded by 2 percent” with the money reallocated to other causes.

“It’s not about taking down police,” Taylor said. “There’s other places that we should support, like schools.”

Newington Mayor Beth DelBuono stood off to the side with a few others, watching the activities unfold.

“I’m trying to respect both sides of the protest and listen to what both sides are here for,” the mayor said.