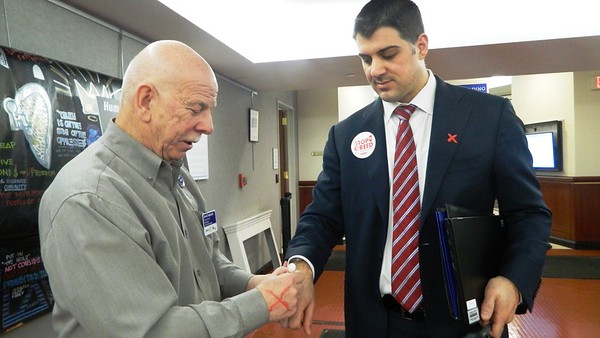 As president of the Newington Rotary Club the last two years, Tedeschi has accomplished quite a bit. Now being installed as Assistant Governor of Rotary’s District 7890, he will be spreading the good works across 57 clubs in Connecticut and western Massachusetts.

Tedeschi became one of 10 new assistant governors during the district’s annual installment meeting, held virtually. He will provide oversight to clubs in Area 9, including Hartford, West Hartford, Farmington, Avon/Canton, Wethersfield/Rocky Hill and his home base of Newington.

“In my mere 15 years in Newington Rotary, this is the first time I’ll see one of our own installed at the District level, which is a testament to David’s commitment to Rotary,” Newington Rotary’s incoming President David Johnson told fellow Rotarians. “David has served as our president with enthusiasm, commitment and dogged determination. I’m certain he will continue with the same determination at the district level and make us proud.”

Each Rotary president is asked to lead a project, event or program during their tenure. Tedeschi led the club in raising over $12,000 to build a handicapped-accessible pavilion in Churchill Park. The Newington Rotary Pavilion was completed in 2018. After that, he founded Newington’s Stop the Traffik! Committee.

“My greatest achievement in Rotary is also my greatest personal achievement,” he told the Town Crier. “It’s propelled awareness and education on how to combat human trafficking. From forums we’ve held, to fundraisers and other projects, we’re very happy with what’s happened. We know we have a long way to go, but we are still planning projects.”

Stop the Traffik! members include Newington Police, local clergymen and women, as well as educators and active business people in town. Over the last year-and-a-half, this group has worked to combat the sex-trafficking of minors in hotels on the Berlin Turnpike, providing resources to victims and motel owners alike. Tedeschi single-handedly organized large forums, to inform the public while bringing together power players in the global anti-trafficking movement. One of the his featured speakers was Freedom United founder and CEO Joseph Schmidt.

With Tedeschi’s guidance, Rotarians also made and donated hundreds of care packages to sex trafficking victims through the Salvation Army’s Bloom Initiative. This past winter, they brought the international End It Campaign to the Lucy Robbins Welles Library and Connecticut’s State Capitol.

“If we can get 57 clubs involved in this fight I think we can make an even greater impact,” Tedeschi pointed out.

In terms of his ongoing work with Newington Rotary, he plans on staying active in the club.

“I just think we have a tremendous bunch of men and women who really care about the areas we focus on. As small as we may be, what we’ve accomplished is phenomenal.”

Tedeschi is looking forward to passing the gavel to the incoming president in less than two weeks.

“David Johnson has been a president of the Newington club in the past; but I know his dedication to bringing together business and professional leaders in order to provide humanitarian service and to advance goodwill and peace around the world is even greater today,” he said. “More importantly, his community involvement and business acumen will help to build loyal and lasting relationships with Rotarians and town residents.”