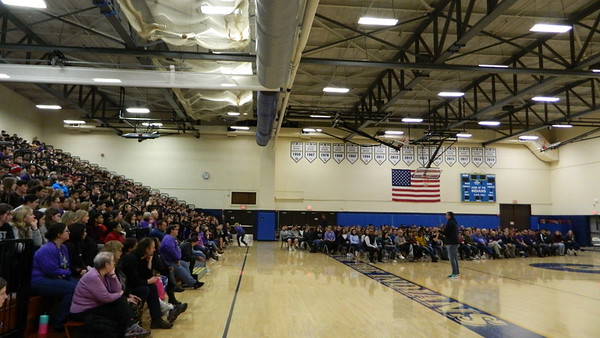 Erica Drzewiecki | Staff Former NBA star talks to a Newington High School student who had an emotional reaction to the talk he gave Tuesday on living your best life. Buy this photo 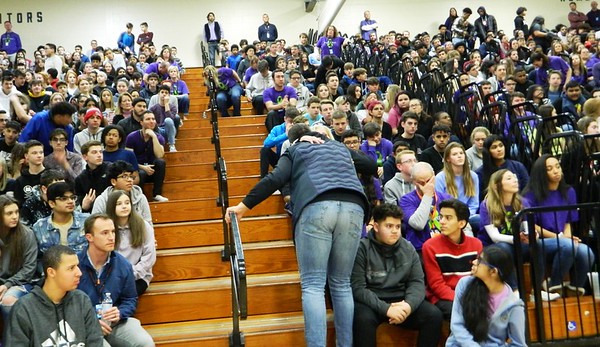 Erica Drzewiecki | Staff Herren shares a hug with the student after they chat following his talk. Buy this photo

Erica Drzewiecki | Staff Former NBA star Chris Herren talks to one of many emotional listeners at Newington High School following Tuesday's assembly where he was the guest speaker. Buy this photo

Erica Drzewiecki | Staff The crowd looks on as Herren hugs a student after his presentation. Buy this photo

NEWINGTON - A former NBA star is inspiring local teens to steer clear of the same harrowing path his life took.

Former Boston Celtics player Chris Herren addressed the Newington High School community Tuesday, sharing his struggles with addiction in hopes that it changes the course for even just one youngster.

The Fall River, Massachusetts native struggled with heroin and other drugs for years before getting sober and founding the Herren Project, which empowers school communities to make healthy choices. He’s spoken to over a million kids around the U.S. since 2009.

“I think we put way too much focus on the worst day that we forget about the first day,” Herren told his audience at NHS, sharing how addiction tore apart his family growing up and then again, when he got married and had children.

Some students walked out of the gymnasium in tears partway through the talk, returning later on to listen in after calming down.

“I don’t know how many of you in here have suffered because of drugs,” Herren said. “I remember my father’s Miller Lites making my mom cry. Then at 13, I started getting wasted in the woods with my friends, on the same beer that ripped my mother apart.”

He asked students to consider how their behavior now might be affecting their own families and friends.

“As you sit in this gym today ask yourself, do you want your little brother or sister to be just like you?”

“This is no longer about me,” Herren continued. “This assembly is about you and the kids you’re becoming. The chances you’re taking and the mistakes you’re making. My goal today is that there’s one student out of the 1,300 here right now who will walk out of here and say, ‘I want to feel better than this. I want to be better than this.’”

“If we can save one life we’re actually saving that person’s loved ones too,” club advisor Christina Redman said.

Students were asked to return to their homerooms after the assembly to process what they had just experienced. Some stood in the hallway hugging their friends and crying.

“I think he really connected with a lot of people,” junior Rodrigo DelValle said. “Personally I know some people who struggle with addiction and this gave me hope to reach out to them again.”

The student added that he didn’t expect Herren would bring him to tears but his words were powerful.

“It was really eye-opening,” senior Gabriella Gray said. “It’s crazy to think it could be anyone. It makes me think I want to do more to help people.”

Principal Terra Tigno was approached by several students asking if they could reach out to Herren afterwards. She shared his email address, which he uses to connect with listeners.

“It was exactly what I hoped it would be,” Tigno said of the talk. “If we can help just one kid - that’s what we’re hoping for. Maybe not now, but later in life they’ll have this to fall back on.”