Erica Drzewiecki | Staff Santina Bennett holds up a piece of painted driftwood outside her shop, Vintage at Strandz in Newington. Buy this photo

Erica Drzewiecki | Staff Santina Bennett’s mother got a union job as a dressmaker after emigrating from Sicily in 1966. Now Bennett collects items with the union’s labels. Buy this photo

Erica Drzewiecki | Staff Santina Bennett admires a women's dress coat from 1950, originally sold by G. Fox and now available in her shop Vintage at Strandz in Newington. Buy this photo

Erica Drzewiecki | Staff Santina Bennett discusses a mask that could have been worn by an opera singer, inside her antique shop, Vintage at Strandz. Buy this photo 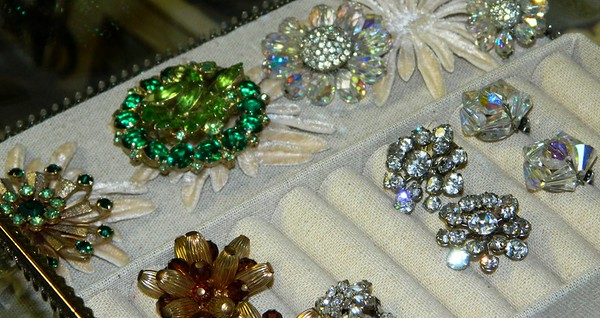 Erica Drzewiecki | Staff A selection of antique broaches inside Vintage at Strandz in downtown Newington. Buy this photo

Erica Drzewiecki | Staff Santina Bennett walks among her treasures inside Vintage at Strandz, an antique shop below Strandz Salon. Buy this photo

Erica Drzewiecki | Staff Bennett discusses a black gown with a union label indicating it was American-made. Buy this photo

Erica Drzewiecki | Staff The entrance into Vintage at Strandz, an antique shop hidden below Strandz Salon and accessed through a side door. Buy this photo

Erica Drzewiecki | Staff A peek inside Vintage at Strandz, Santina Bennett's antique boutique below a salon in the center of Newington. Buy this photo

Erica Drzewiecki | Staff Some of the art and treasures for sale inside Vintage at Strandz, 75 Market Sq., Newington. Buy this photo

NEWINGTON - Tucked behind a salon and down a flight of stairs, few people even know it exists.

Sometimes a patient having their teeth cleaned next door will catch a glimpse of the entrance, adorned with lawn ornaments and stone art, and wander over. If Santina’s around, a small sign in the door will be flipped to “open” - visible from the parking lot between Strandz Salon at 75 Market Square and the adjacent Market Square Dental Associates.

Santina Bennett is a stylist at Strandz who keeps her treasures in the basement: genuine fur accessories, flapper dresses, glamorous hats and foreign art.

An antique collector with rare and exquisite taste, Bennett’s shop is called Vintage at Strandz. She doesn’t do consignment and doesn’t want to buy your great aunt’s best negligee. Making the discovery herself is all part of her fun, of course.

Sometimes a specific item will draw her in from afar. Her husband, George, will stop the car and they’ll go into whatever market or thrift store that beckons.

“Things will call to me and say, ‘Come and pick me up,’” she says, clipping a sparkling broach to a ’40s beret.

An Italian accent charms as she invites a child whose mom is having her hair done to come downstairs and meet Phillip the Penguin. Kids love Santina and her shop, where she plays pretend and introduces them to “Pepito” the hanging parrot. If they’re careful with her pretty and fragile things, she might offer them a novelty toy to take home.

“Some people, they find things and want to keep them all for themselves. I have to share it,” she says. “When we’re gone it will all still be here.”

The shop doesn’t get too many visitors, since Bennett doesn’t keep regular hours and doesn’t really advertise.

“I have the supply but not the demand,” she says, smiling.

She’s okay with sales being few and far between, since most of her business is conducted at the Brimfield Antique Flea Markets in May, July and September. She’s also a regular at auctions, unearthing the most unique pieces.

“I’ve been collecting a long time,” Bennett says. “You have to have an eye for it. I’ve been fortunate enough to travel a lot and find items. Now I’m their caretaker.”

A dress worn in 1953 for the Queen’s inauguration and a wine chalice used at that evening’s dinner are among her collection. There’s also a golden cocktail dress by William Travilla, famous for designing costumes for Marilyn Monroe when she starred in “Gentleman Prefer Blondes” and other films. Dozens and dozens of hats from different eras are placed wherever they can fit, some dating back to the 1800s. A purse from Cuba with a real alligator head on the buckle is among some unusual animal gear and a pink satin housecoat was most surely worn by a wealthy housewife in the Thirties. There’s even a muff made of fur from a black bear, dating back to the late 19th century.

Bennett doesn’t know the histories of most of items in her showroom, but she can imagine what they might be.

“If I touch it and I feel something bad I won’t buy it,” she says.

Just in case, a bundle of sage burns at the back of the shop to keep out evil spirits. Behind it, a dressing room boasts classic Vogue photographs on the wall.

There’s a real difference in touch between good and bad silk, according to Bennett, who swears by the Italian kind.

“You can tell when it’s not made with a lot of love,” she says. “Vintage things are made better. I could go into malls and feel the materials deteriorating. They’re just not the same.”

She was 14 when her family came to New Britain from Sicily in 1966. Her mother got a union job as a dressmaker. To this day, Bennett still collects items with the union’s labels. She went to hairdressing school, got married and bought a house in Newington, where she and her husband have lived for 30 years. Their son George died of leukemia at 22.

The tragedy shook the family and the Newington community, where the popular young man and star athlete grew up. Bennett found comfort in her collecting, a hobby that continues to this day. In her spare time, she volunteers at the Holy Trinity Church in Hartford. Her hair is currently dyed a sprinkling of funny colors; it makes the kids there laugh.

This past October Bennett dressed models for the Newington Rotary Club’s Fashion Show, which collected over $1,500 for local efforts to end sex-trafficking. The event was a real highlight for Bennett, who is already preparing outfits for the next one.

When she doesn’t have a client upstairs, she’s often down in her shop, chatting with friends, munching on pizzelles or trying on hats and playing pretend. If the door’s open, stop in and say hello.