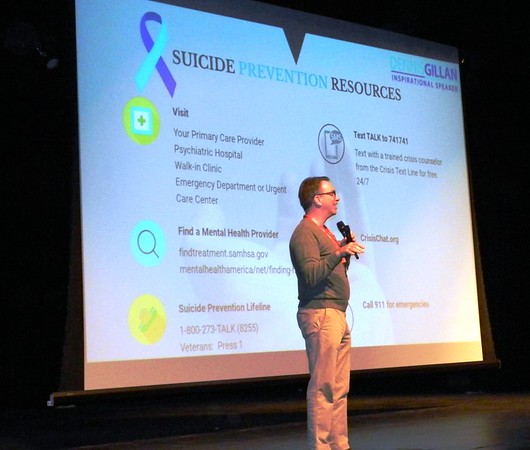 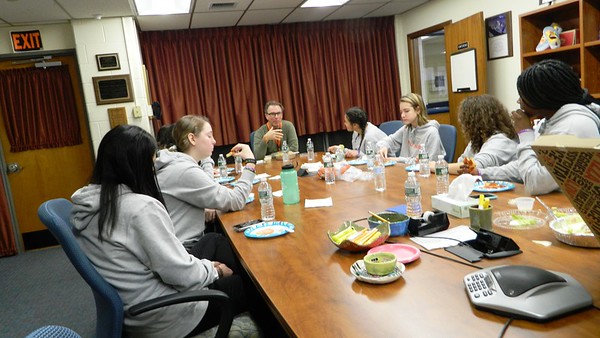 NEWINGTON – Local teens are talking about suicide in hopes of preventing it.

Right before Christmas break, Newington High School hosted a Suicide Prevention Day. Students received resources in their homerooms that morning, before hearing from an inspirational speaker in the auditorium and participating in an improvisational theater performance in the gym that afternoon.

“Suicide is a nationwide issue and there are a lot of things the schools are introducing to help with mental health,” senior Giulianna Iapalucci pointed out.

As a Student Council officer, Iapalucci helped plan the day along with the NHS Stop the Stigma Club.

They made a chart connecting specific staff with problems for which they are accessible. While teachers can address homework and academic challenges, for example, the school psychologist and counselors are better equipped to handle family disagreements, social anxiety and bullying. They also created S.A.F.E. boxes around the school for people to drop in anonymous tips. SAFE stands for Sharing Anonymously For Everyone’s safety. The boxes are checked daily by administrators and SAFE forms are also available online, at npsct.org.

“I think suicide is an issue that’s not talked about enough,” Cassie Mayer said. “Being a student, I know people who are definitely affected by it.”

When small crises go unaddressed, they can escalate quickly into heavy stuff. Students must understand that their school is not only a place of learning, but also a safe haven. This was one of the messages the day communicated.

“We need to make people aware of where they can go,” Mayer added. “Social workers here can direct you to outside help. A lot of kids don’t know how accessible they are. They think they can only go see them when they’re in a crisis situation, but it doesn’t have to be something big.”

STUCO officers met with Principal Terra Tigno over the summer about putting together the program.

“Unfortunately, the number of suicides continues to rise,” Tigno explained. “We recognize that students are experiencing a tremendous amount of stress and anxiety and often times don’t know where to turn to for help. It’s important that students know where to go, who to call, etc.”

A highlight of the day was a visit from Dennis Gillan, a New York man who lost both his brothers to suicide. Dressed in his “good luck shirt” he had lunch with officers before the assembly. Fittingly, they wore sweatshirts with phrases like “You matter” and “I love all humans: you are not alone.”

“Everybody’s recovering from something and everybody loves a good comeback,” Gillan told his audience at the start of what was both a funny and serious presentation.

He was in college when his sister called to tell him their brother had been in a car accident.

“He died in a car but the car never left the driveway,” Gillan remembered.

Mark battled depression for years before ending his life. Upon returning to college, Gillan didn’t say a word about what had happened. Instead, he began drinking and using drugs excessively. His other brother Matt was suffering too, and ended his own life 11 years later.

“If Matt and I had talked about our brother’s death, I think he’d still be alive today,” Gillan told students.

He went on to encourage them to talk to each other and trusted adults, frequently.

“Mental health is just as important as physical health. Take advantage of the services available to you,” he said.

The Greater Hartford Academy of the Arts’ Looking In Theatre also came to NHS for the day. Actors improvised as characters in challenging situations, while students prompted them with questions.

Not everybody has the courage to share their feelings or report a concern, pointed out Lindsey Forauer.

“People who are afraid to speak up can’t do anything, so people who can do it, should do it,” she said.

STUCO advisor Melissa Morello was proud of how the school’s leaders took initiative to help their classmates.

“This issue might not be affecting you in this present moment, but it could affect you in your twenties, thirties, or maybe even your forties,” she said.

Text TALK to 741741 to reach a crisis counselor