Erica Drzewiecki | Staff A switchboard inside the studio at Newington Community Television. Buy this photo

Erica Drzewiecki | Staff A switchboard inside the studio at Newington Community Television. Buy this photo 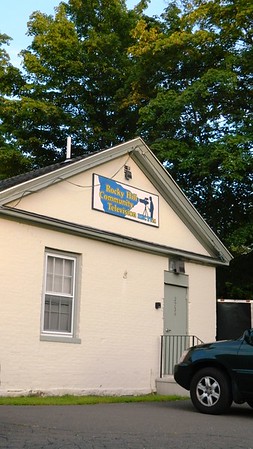 Erica Drzewiecki | Staff Rocky Hill Community Television, a small operation at 2754 Main St. that has been around for decades. Buy this photo

Erica Drzewiecki | Staff Inside the studio at Newington Community Television, where the popular “Talk to the Mayor” show is filmed. Buy this photo 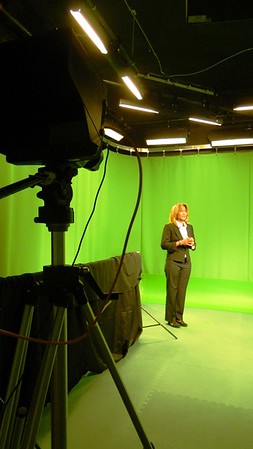 In a society where the latest is greatest, an old-fashioned technology is being reinforced to stand tall and proud.

Public, Educational and Government Access TV (PEG) has stood the test of time, with about 40 stations still remaining in Connecticut. One of the largest operations in the area is Nutmeg Television, based out of Farmington.

This non-profit organization has a 9,000-square-foot studio and serves eight towns, including Bristol, New Britain and Plainville. Film equipment here is always checked out by residents, who can take classes in field production and editing free-of-charge. For young adults pursuing a career in media or a related field, that experience proves invaluable.

“People come out of school with a communications degree and they can’t get a job because they don’t have experience,” CEO Joanie Sutter says. “Companies will send them here. There are celebrities around the country who got their start in public access. There’s nothing like seeing your name in credits on your TV in your living room.”

Director of Technology and Production Services Chris Bennett has a down-to-earth teaching style.

“Even someone who has never gotten involved with cameras before can be a pro in no time,” Bennett says. “We’ve designed it so someone who wants to make a career out of this has everything they need to do that here.”

There are currently 14 shows on-air featuring religion, fitness, art and cooking. One of the most popular is “Crack of Dawn” with producer Dawn Lombardi, who cracks jokes while leading an art demonstration. She compares herself to a modern-day Bob Ross, with humor.

“Because of YouTube people from all over are seeing and watching it now,” Lombardi says. “A lot of people like it.”

Local restaurant chefs and home cooks take the opportunity to share their craft. An in-studio kitchen is equipped with a hanging mirror to shoot close-up shots of food. New Britain’s East Side Restaurant Owner Nick Augustino has done several segments on Nutmeg.

The station recently earned its fifth Telly Award for a documentary on Cortland Hull, of the legendary Witch’s Dungeon Classic Movie Museum in Bristol.

Volunteers film about 20 town government meetings each month. Local candidates come to the studio to give campaign statements.

“Think of us as a digital town green,” Sutter says.

Cox Cable represents Newington, Wethersfield and Rocky Hill, each of which have not-for-profit operations.

Newington Community Television is celebrating its 33rd year on the air. This all volunteer-run station is small but proud, praised for its commitment to local government and event coverage. The 1,900-square-foot studio is located in Newington Town Hall and a yearly stipend from the town assists operations.

“How much we get depends on the flavor of who’s in charge,” volunteer Patty Foley says. “There are a special few in town government who do care because they know the transparency value we bring to the community.”

People who borrow a camera often end up learning how to edit film in the process and become regular volunteers. Scott Allo turned his station experience into an outside career in production. Now he’s giving back what he gained.

“When we get together, 10-12 of us working on a project, it’s a lot of fun,” Allo says, thinking back to how busy the team was during Newington’s Memorial Day Parade last spring.

Popular shows include Talk to the Mayor and After the Bell. People can even bring in their own video to be aired.

“They say a picture is worth a thousand words; we do 30 frames per second,” Allo says.

Rocky Hill Community Television can be found in a stand-alone building on Main Street. This organization has changed a lot over the years, according to President Andy Brescia.

“We still have a small core of volunteers keeping us alive, but it’s not like it was 20 years ago,” he explains.

The town still owns the facility, but no longer provides funding to the station. Brescia is restructuring to accommodate a new media server and stream video online. This tech-savvy town native has volunteered there the last 25 years.

“Everybody’s used to instant product now and that’s what will make us survive,” he points out. “The future still looks viable because we have knowledgeable people on board who can adapt.”

People like volunteer and executive producer Marisol Datiz, who launched two new shows at the beginning of the year. “Inspirational Journeys” is about overcoming personal challenges. “For Arts Sake” highlights area musicians. Both are viewed by followers around the globe through Datiz’s YouTube Channel, Sea & Sun Productions.

“We want the community to know we’re here and this is a place they can come to share their stories and inspire others,” Datiz said at a recent filming. “There are so many creative people. We’d love to have all of them here.”

In a revolving door of new media, community television has not left the rotation. Every public access station offers positive engagement opportunities. Even households that have cut the cord can volunteer and learn a new skill, borrow film equipment and make a movie or watch their neighbors make history in streaming video online.

If proponents of this longstanding media have one message for the public, Brescia says it best: “We are still relevant. Support us.”