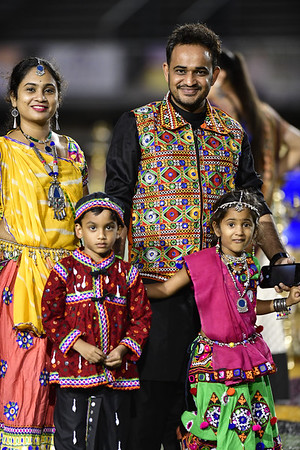 Members of the Badgujar family, Jigisha and her husband Jigar and their children Aarambh and Shree. Buy this photo

Some of the participants during the Indian Navaratri festival. Buy this photo 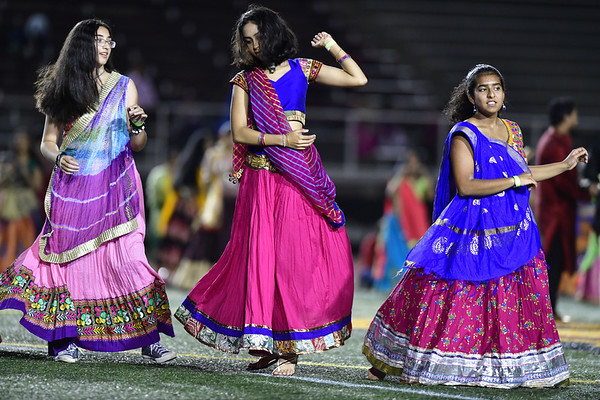 Dancers in colorful dresses at the Navaratri last Saturday night. Buy this photo

Jigisha Badgujar and her children Aarambh and Shree. Buy this photo

The dancers quickly filled the field as music flowed from a decorated stage. Many women wore the traditional sari, each one sporting a vibrant hue or intricate pattern. They danced and swayed in several large circles around their goddess, who the festival is for, long into the night.

Garba singer Achal Mehta came from India to perform at the event.

“Here we are celebrating. This is a tradition of dance,” said Sue Suvosree, from Avon. “It’s very colorful. Happiness is everywhere.”

Rajeev Desai, founder and president of the Vallabhdham Temple in Newington, which hosted the festival, estimated around 5,000 people turned out.

There’s a good reason why this Navaratri is so big.

The Navaratri in New Britain is the exception.

“All in all it’s really big - lots of shops. It’s really well organized,” said Hitesh Bhatt, who attended with his family. They came from Massachusetts for the festival.

“I’m really excited to do something in an open field,” he said. “This is just a very unique way of holding it.”

“In Connecticut, this is the first time we’re seeing this level of event,” said Anil Dehriya, who said he liked how big the event was and how it was outside in the open.

Over 25 vendors sold Indian clothing, snacks and other items. Children played in a Kids Zone with a bounce house. Attendees ate Indian street food and later viewed a fireworks show.

Manushi Gandhi, of Aashima Collections, was there for the first time selling clothing.

“We are excited about the Garba. We love to dance,” she said. “It’s devoted to the goddess. We are going to pray to her.”

The Pandya family, of the business Sui Dhaga, were also vendors at the event, selling items handcrafted by women in India.

“We just started our own business,” said Monil Pandya, son of Rajesh and Sangeeta Pandya. The business was also an opportunity for them to share their culture, added Monil Pandya.

The sacred festival takes place for nine nights every fall across India, but it was only at the stadium for one night.

“The reason we are doing this is for the next generation,” he said, so they know their heritage and culture.

Money raised at the event will go to the nonprofit Vaishnav Parivar of Connecticut, which is part of the Vallabhdham Temple. The nonprofit hosts medical camps, flu-shot clinics, humanitarian services and diversity programming for Indians across the state.

Michelle Jalbert can be reached at mjalbert@centralctcommunications.com.