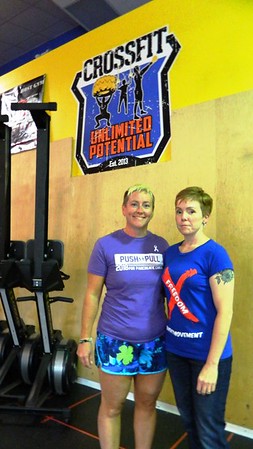 NEWINGTON - Your body is always a good cause to work out for, but here are two more.

CrossFit Unlimited Potential at 133 Louis St. is hosting two upcoming fundraisers where a workout will be the main event.

The first - set for Sunday, Sept. 29 - is the gym’s second annual Labor of Love, to aid in local rescue efforts of sex-trafficking victims. Tickets are $40 and available at the door or in advance. Registration begins at 8:30 a.m. and the workout will start at 9:45 a.m.

The second - set for Sunday, Nov. 10 at 10 a.m. - is Push/Pull for Pancreatic Cancer. This one benefits non-profit organization Project Purple, which funds critical research and patient support for those affected by this disease. Tickets are $25. Search for both events on Facebook and EventBrite.

Labor of Love founder Sandi Dauch has designed a 13-minute Workout of the Day (WOD) for people to do in As Many Rounds As Possible (AMRAP), acronyms used worldwide by CrossFit regulars. People in at least 22 different states will be joining Newington’s CrossFit Unlimited community in the Labor of Love movement this year.

“My goal is to eventually get to all 50 states,” Dauch said.

She based the workout off of human trafficking statistics. From 2016 to 2017 there was a 13 percent increase in trafficking cases nationwide, hence the 13-minute time frame.

The workout begins with a 200-meter run. Last year it was 400 meters, since the average day in 2016 saw 403,000 people living in conditions of modern slavery. That’s in the U.S. alone, with millions estimated worldwide.

Next people will do 33 sit-ups, representing the 33 percent of victims aged 18 and under. Then 28 air squats, since the industry profits $2.8 billion yearly. Finally 18 kettle-bell swings, to represent victims under age 18.

“I wanted to create a workout that anyone could do, young or older, basic movements,” Dauch explained. “The numbers just show how this problem has become worse in recent years. Hopefully they will start to trend downward.”

She started Labor of Love to address a problem that many people aren’t even aware exists in this region.

“When I found out this information I just felt blessed that I have two daughters and we haven’t been affected personally, then I felt an obligation to help people who were.”

CrossFit Unlimited Potential owner Tammy Judson was thrilled to get on board. The facility is not far off the Berlin Turnpike, a hotspot for traffickers who operate their black market dealings out of motels along the highway.

“We live near the biggest human trafficking corridor in the state so this hits close to home,” Judson pointed out. “It’s where we do our grocery shopping and take our kids to get ice cream.”

One of her CrossFit members happens to serve on the Newington Rotary’s Stop the Traffik Committee and is very involved in local efforts to end trafficking and help victims. Patricia Young, also a member of Newington’s LifeWay Church, spent months as a caregiver to women in a safe house in Miami, Florida, a trip her church sponsored.

The Push/Pull event Leader is Kami Astorino, another athlete and coach at the gym. She decided to partner with Project Purple after her grandmother Alice passed away from pancreatic cancer in 2018.

“It was like the rug was pulled out from underneath me,” Astorino remembered of the grief she felt, which she turned into a positive by organizing a small fundraiser that spring.

“This year I’ve spread my wings and reached out to more people, which I would not be able to do without Tammy and the gym,” Astorino said of her second event.

The workout she designed is also geared towards people of all abilities, even those who are not familiar with CrossFit. The main goal, after all - is to raise awareness.

“A lot of people don’t know what pancreatic cancer is and don’t recognize the signs and symptoms,” Astorino said. “The statistics are staggering. Ninety-one percent of people who are diagnosed die of the disease. Early detection is crucial.”

WHAT: The 2nd annual Labor of Love

WHAT: Push/Pull for Pancreatic Cancer