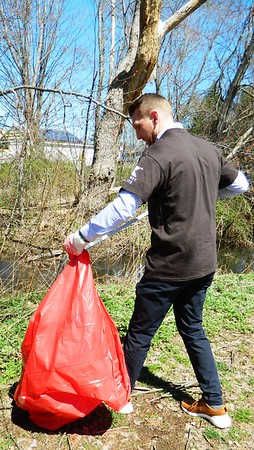 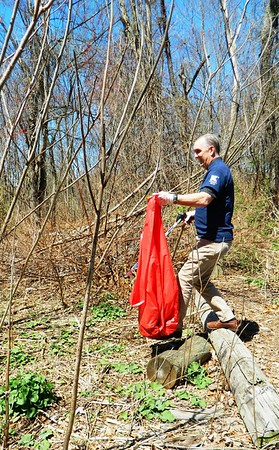 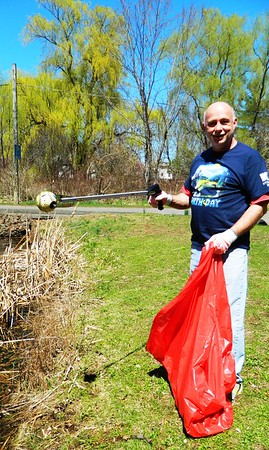 They carried recyclable trash bags and toted trash pickers - long metal tools with a button at the hand-holding top and a pincher at the trash-picking end.

Every hour that saw pleasant weather they deployed from the company’s Main Street headquarters in crews of three to six people. The town’s big parks like Churchill, Mill Pond and the Clem Lemire Recreational Complex were all scoured for litter. The small neighborhood parks like Eagle Lantern and Badger Field also received a good scrubbing. Even streets and grass medians encountered their goodwill.

“Because we don’t know what the weather will be like we stretch this over two weeks,” programming manager Steve Burzynski explained. “The company response has gone really well. People started signing up for this early in the year.”

Burzynski started the company initiative in 2013, pulling inspiration from a project his daughter was doing in school.

In the last six years, Keeney has excavated well over 3,000 pounds of trash from Newington’s ground. The 2018 cleanup event alone resulted in 476 pounds of trash. This year the big weigh-in will happen on Friday, April 26, around noontime during a fountain-opening ceremony in front of the facility.

“The fountain is kind of a landmark for the community on Main Street,” director of manufacturing Andrew Holden pointed out. “Employees get really excited about turning it on every spring.”

Everyone has wagers on how much trash has been collected over the last two weeks. The person with the closest guess will take home a nice reward.

“The most important thing for us is giving back to our community,” Holden said.

As one of the largest manufacturers of plumbing products in the world, Keeney is keen on being ‘green.’

“Environmental sustainability is very important to our company,” said Holden, whose father, Jamie Holden, and uncle Stuart Holden are co-owners.

They started a new initiative last summer, recycling cardboard as protective material inside the company’s packaging.

“We reduced our output by roughly 65 percent,” Holden said.

“It’s great to get out here and get the parks ready for families,” she said.

Newington’s Annual Earth Day Cleanup is set to take place this Saturday, April 27 from 9 a.m. until 2 p.m. The rain and snow date is May 4. Volunteers meet in Churchill Park. The morning will begin with an awards presentation for kids who created Earth Day-themed posters.

How can you make Newington a cleaner place to live, work and play?

It begins in Churchill Park on Main St.