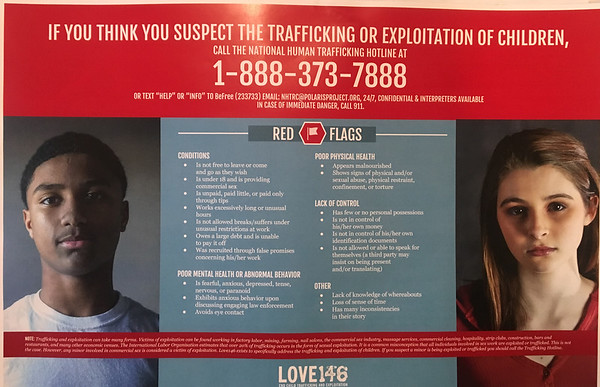 NEWINGTON – A new committee has formed in town, with a mission to tackle the modern-day slavery known as human trafficking.

The group is hosting its first Public Forum on Human Trafficking Tuesday, March 5 from 6-8 p.m. inside the auditorium at John Wallace Middle School, 71 Halleran Dr. Speakers will address the issue itself, how it affects youth locally and warning signs to prevent it and report it.

Committee member Patricia Young spent three months volunteering in Miami, Florida at a safe house for victims. Volunteers would like to start up a similar project here in Connecticut, where sex-trafficking has largely remained hidden in a black market.

“Everything always starts at the local level,” Young said. “The more you find out about this unfortunate evil the more you realize it’s happening everywhere.”

Tedeschi and several others were first introduced to human trafficking at a Rotary International convention in Atlanta, Georgia. As they learned, a trafficker uses force, fraud or coercion to control another person for the purpose of engaging in commercial sex acts or soliciting labor or services against his or her will.

“We had no idea how prevalent it was in the United States,” Tedeschi said. “My heart sank when I learned this stuff was going on, not just in Thailand or Africa but right here in our backyards.”

The Berlin Turnpike, a known hot-spot for prostitution and drug transactions, has also been the site of several human trafficking cases. One of the most high-profile of these is detailed in the book, “The Berlin Turnpike: A True Story of Human Trafficking in America.”

The U.S. Dept. of Homeland Security’s Blue Campaign, the Human Anti-Trafficking Response Team (HART) and CT Department of Children and Families’ Trafficking in Persons Council (TIP) are working to to combat this issue. Still, TIP’s 2017 Annual Report estimated there were 2,000 buyers of child sex in our state over the course of one year.

Stop the Traffik!’s first order of business is raising awareness in the upcoming forum. Freedom United CEO Joe Schmidt will be a special guest speaker. The second goal is educating youth. School curriculum on human trafficking has only been implemented in public schools in California. Committee members plan to reach out to local youth community groups to spread the word.

“As Rotarians we feel we can be advocates for change, but we can’t do it alone,” Tedeschi said.

Past President LeeAnn Johnson’s main goal is to raise awareness in schools.

“Children need to understand what the dangers are,” she explained. “Often times they aren’t even aware they’re being preyed upon and they are trafficked before they even know they’re in danger.”

Trafficking criminals tend to seek out vulnerable and naïve teen girls in places like shopping malls or movie theatres. They get hooked with compliments, gifts or even legitimate employment offers.

“It’s heinous,” Johnson added. “And it deserves more attention than it’s getting. Any light we can shed on it, any awareness we can raise, is time well spent.”

Public Act 17-32, An Act Concerning Human Trafficking, requires the operators of certain businesses to post notices concerning services available to trafficking victims. However, there is currently no agency monitoring compliance.

Stop the Traffik! plans to distribute posters to local motels, salons and other common trafficking sites.

“We want to make sure any business identified in that public act has a flyer posted,” Tedeschi said. “We also want to make their accountability addressed by the law. The more we understand and recognize the signs of human trafficking, the closer we come to freeing those enslaved.”

Call 888-373-7888 if you suspect someone is being trafficked. The toll-free National Human Trafficking Hotline is open 24 hours a day, 7 days a week and available in more than 200 languages. Tips can also be submitted at humantraffickinghotline.org.

WHAT: Stop the Traffik! Public Forum