Photo by Erica Drzewiecki | Staff Small Parts Cell Leader Stanley Padykula with a horizontal pin, the first part he ever worked with when he started at PCX Aerostructures 38 years ago. Buy this photo 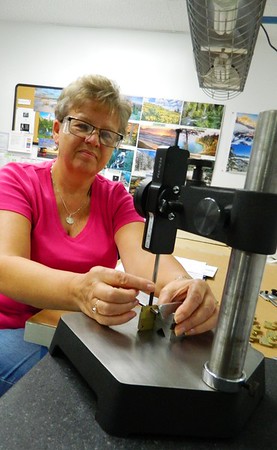 Photo by Erica Drzewiecki | Staff Small Parts Cell Leader Stanley Padykula at a computer where employees log in activities on the shop floor at PCX Aerostructures in Newington. Buy this photo 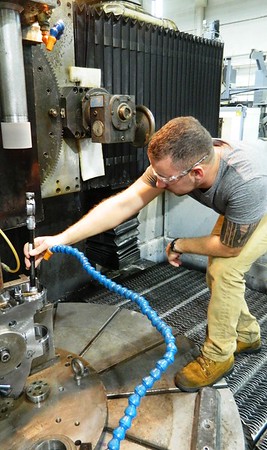 Photo by Erica Drzewecki | Staff Apprentice Damian Tereda works on a machine at PCX Aerostructures in Newington. Buy this photo

NEWINGTON – PCX Aerostructures is for Polish.

The Newington-based company is a leader in the aerospace manufacturing industry and a popular employer among the local Polish community.

This tale begins with Stanley Padykula, supervisor of the factory’s Small Parts Cell. This September, he’ll celebrate 38 years with the company – all of those in the same cell.

But as he’ll tell you, it wasn’t always called that.

“I was living in New Britain, going to school at E.C. Goodwin Tech for tool and die,” Padykula remembered. “I started driving when I was 16 and there was a sign on Fenn Road that said ‘Help Wanted.’ I must have passed by that sign for a few years before I went in and got an application.”

Formerly Fenn Manufacturing, the company hired him as an hourly worker, running lathe and grinding machines. Nearly a decade later he moved up into a management position, where he’s been ever since.

“Most of my family is in manufacturing,” Padykula explained. “I was nine years old when we came here from Poland in 1970. Those were the good paying jobs. They still are.”

Back then, the jobs were all manual. Workers meticulously measured and fashioned parts by hand. The first part Padykula worked on was a horizontal pin for a Boeing helicopter rotor head, which the company still manufactures.

“The part is still the same,” he said. “There are just different ways of making it now. We have machines that make it faster and better quality.”

He supervises 18 employees, making certain their work is done correctly. There are no mistakes in aerospace. More than two-thirds of the company’s production is for the U.S. Department of Defense.

“About 15 years ago we moved away from the old school machining,” says Trevor Hartman, vice president of sales and marketing. “Having been here in this location since the 1950s, there’s a lot of legacy in a shop like this. A lot of evolution has happened here. We’ve had to reinvent ourselves and the way we do things.”

Lab technician Donna Jaskinski was a friend of Padykula’s from New Britain’s Little Poland, looking for a factory job after the one she worked at closed down. That was 12 years ago.

“She was part of the community,” Padykula remembered. “We had an opening for an inspector and I said, ‘Why don’t you come over and apply?’”

After four years Jasinski was transferred to Receiving Inspection, where she checks small parts as they arrive.

“This is a good, clean place to work and a friendly atmosphere,” said Jasinski, measuring the circumference of a tiny part in her hand.

Like Padykula and Jasinski, a large portion of PCX employees are Polish and many know each other.

Manufacturing pays better than other jobs commonly picked up by new immigrants, such as cleaning houses. Difficulties communicating can be overcome, and the machines all speak the same language.

“What attracted people in the Polish community to manufacturing when they immigrated here is they had a skill, could run machines and did not need a college degree to make a lot of money in this,” Padykula explained.

The next generation is now following their parents and grandparents to PCX.

Machinist Joe Klecha came to the U.S. from Poland when he was 17 and started working at Fenn Manufacturing three years later. He retired in 2013 and PCX just hired his grandson Eric.

“I lived over here by the college,” Bartosiewicz says in a Polish accent that’s softened over his years speaking English. “I had a couple jobs before this but I kept quitting. My father told me to stop being a bum and that’s when I came here.”

It’s just the beginning for Damian Tereda, an apprentice in precision gear grinding. The Berlin resident also has ties to Little Poland, as a member of the Polish Scouting Organization in his youth.

“I started in December,” Tereda said. “I love it here. It’s a fast-paced environment.”

PCX has a growing apprenticeship program, one of the few in the area to offer paid positions with union membership, skill development and near-guaranteed future employment.

Polish or not, apply within.