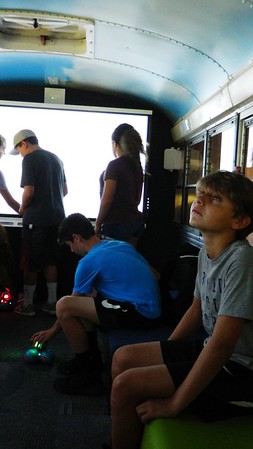 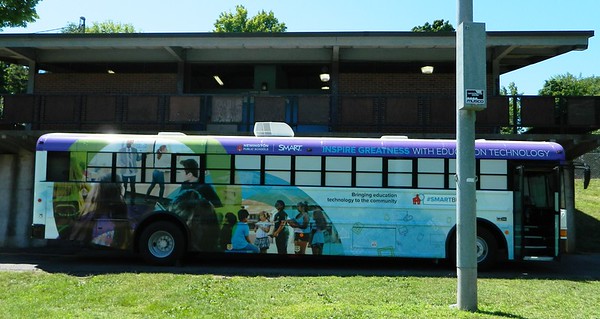 NEWINGTON – An unusual guest showed up at summer camp recently.

Newington Parks and Recreation campers were excited to see a 45-ft., colorful creature sitting in Churchill Park when they came for their usual fun day of activities.

It was actually Newington Public Schools’ SMART Bus, which has spent the last three weeks touring Newington, all the while delighting campers and elementary school students alike.

Families from Anna Reynolds, Elizabeth Green, John Paterson and Ruth Chaffee were invited to check out the technological marvel as well.

“We wanted to be able to share this fun, summer technology experience with the community,” NPS Digital Content Specialist Kaitlin Norton explained.

The SMART Bus is a district creation, debuted last October 2017 by Educational Technology Director Jay Salerno and his team.

Through his involvement with the Google Innovator program, Salerno harnessed assistance from Canadian company Smart Technologies to launch the project. Formerly an athletic bus that transported Newington sports teams to and from games, the vehicle was decommissioned from use by the district. Staff used in-kind donations from Dattco and Newington’s own Image 360 to make repairs and design updates to the interior of the bus.

It now boasts three Smart Boards, along with innovative Wi-Fi, audio and video capabilities. School staff set up different activities inside the bus, depending on the age level of intended participants. The last three weeks exploration was geared toward elementary-aged students, who took part in coding and robot design.

“We really wanted to gear it towards grades one to four because that’s where we see the most growth in students and excitement about technology,” Norton pointed out.

Opening it up to Camp Recreate also brought the opportunity to kids who would never have experienced it otherwise.

“Some of the campers aren’t full-time residents or go to a magnet school somewhere else, so it’s nice to give them the same exposure as kids in our schools,” said Jessi Dalton, library media specialist at John Paterson.

“A lot of teachers haven’t been on it yet,” Norton said. “We will be able to provide a field trip experience in the parking lot. Students can have a lesson or do something new with technology.”

Newington Public Schools have made it a priority to incorporate unmatched opportunities in STEM (Science, Technology, Engineering and Math) across the district.

Third- and fourth-graders in town can take part in the TechSpert program to expand their digital learning. If the fancy strikes them a few years later, they might consider joining Martin Kellogg Middle School’s Biomedical Sciences Academy, or John Wallace Middle School’s Academy of Aerospace & Engineering.