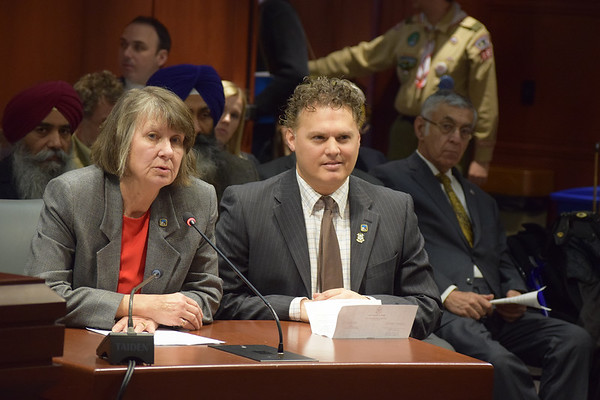 Photo courtesy of House GOP From left, Newington Town Councilor Gail Budrejko and state Rep. Gary Byron, R-Newington, testify on Senate Bill 502, which would convey a 28-acre parcel on Cedar Mountain to the town of Newington. Buy this photo

NEWINGTON - Town officials are working to secure another parcel of land atop Cedar Mountain.

In 2014 the state Department of Energy and Environmental Protection and the Office of Policy Management determined that a 28-acre parcel of surplus land had no economic value and recommended it be conveyed to the town through a conservation easement. Time passed and no action was taken. Then last September, Town Councilor Gail Budrejko sent legislators a letter signed by the council to finally move the transfer forward.

“It’s something that was sitting in limbo and we wanted to get going on it,” she explained.

“It has been over three years since the recommendations were finalized,” the letter read. “This land has little to no value to the state but is of value to the residents of Newington, and contributes towards Newington’s long term goal of securing and preserving available properties along Cedar Mountain. There will be no cost to the town.”

Budrejko joined state Rep. Gary Byron, R-Newington, Mayor Roy Zartarian and Town Planner Craig Minor at the state Capitol this week to testify for Senate Bill 502, “An Act Concerning the Conveyance of Certain Parcels of State Land.” The bill would allow the Commissioner of Mental Health and Addiction Services to convey the land, formerly belonging to Cedarcrest Hospital, to the town. The plan is to preserve it as open space and create hiking trails for the community.

“This land conveyance will positively impact the citizens living in my district and I fully stand by the town’s efforts to acquire this land,” Byron told fellow legislators this week.

Minor said the town would be “a good steward” by protecting the parcel, which the DEEP identified as crucial to the nesting of threatened Peregrine falcons and other wildlife.

Budrejko has been involved in efforts to protect Cedar Mountain from the start.

“Newington residents care deeply about Cedar Mountain, not only for its ecological value, but also for its vistas and natural landscape,” she pointed out.

People have long recreated there, walking and biking on trails between North Mountain Road and the Connecticut Humane Society on Russell Road. Efforts to secure additional land began in the late 2000s, when national home builder Toll Brothers presented an application to build luxury housing there. That proposal ignited a firestorm from residents and environmental activists alike. The grass roots movement ‘”Save Cedar Mountain” formed and the company relinquished the land several years later following a lengthy battle.

Meanwhile, the town purchased the 28-acre Marcap parcel for preservation in 2011, and the state put the nearby Cedarcrest Hospital site up for sale in 2012. The former psychiatric hospital property did not garner much interest.

Newington is over 96 percent developed and Cedar Mountain is among the little remaining open space in town. Preserving it is a priority in Newington’s 2020 Plan of Conservation and Development.

The Government Administration and Elections committee has until March 28 to act on the proposed legislation. If approved, it will move forward to the full House of Representatives and State Senate for debate and vote.

Erica Drzewiecki can be reached at 860-801-5097 or eschmitt@centralctcommunications.com.