Photo by Erica Schmitt | Staff Candidate for Governor Sean Connolly learns about the inner workings of Frasal Tool in Newington from Estimator and Process Planner Mike Budnykiewicz. Buy this photo 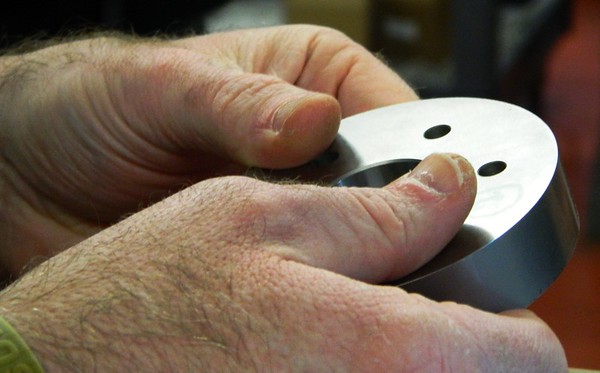 Erica Schmitt | Staff Sean Connolly handles a part made at Frasal Tool, a stop on his tour of Connecticut employers. Buy this photo 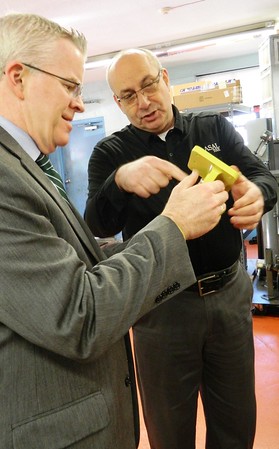 NEWINGTON - One of a few dozen hopefuls for the 2018 gubernatorial race recently visited a small but mighty manufacturer in town.

Democrat Sean Connolly of Hebron, who announced his candidacy in December, came to Frasal Tool at 14 Foster St. He toured the 45-year-old company’s 10,000-square-foot facility as part of an ongoing jobs tour.

“Since day one of my campaign I’ve been talking about our state’s economy,” Connolly said. “It’s businesses like Frasal Tool that offer great careers with good pay and benefits. We need to help them get the talent they need to grow and make the state’s economy grow.”

A lieutenant colonel in the U.S. Army Reserve and an Iraq War veteran, Connolly spent seven years on active duty in the Army. After leaving active duty he worked as a prosecutor at Pratt & Whitney, going on to become the company’s Global Ethics and Compliance Officer. He most recently served as the state commissioner of the Department of Veterans Affairs.

“Tool-making is a great trade and we’d love to see more people in it,” Giangrave said. “It’s been great to get Sean’s perspective of what things look like for a small business if he is elected governor.”

“With the questions we asked, he seemed to be very energetic about helping manufacturing,” added Frank Giangrave, Paul’s brother and the company’s general manager.

They were joined by estimator/process planner Mike Budynkiewicz, who offered Connolly some insight into working in the manufacturing industry in general and the tool-making sector in particular.

“Toolmaking is a real craftsman talent,” Budynkiewicz pointed out. “A lot of the older guys are leaving the industry and you just don’t learn the tricks of the trade in school. It takes years of experience to master the techniques.”

An East Hartford native, Connolly is the son of an Irish immigrant who started a small landscaping business.

He and Giangrave found common ground in their family backgrounds, having been raised by fathers who taught them the importance of hard work.

“My father started this company in the 1970s out of a two-car garage in New Britain,” Giangrave told him.

He went on to ask the candidate how he might consider helping small manufacturers in a state with a difficult business climate.

“What can you do to incentivize for companies to stay here?” he explained.

Connolly said his proposals include investment in the small business sector, college loan forgiveness for trade school graduates who decide to settle in Connecticut, and income tax credits for first-time homebuyers.

Erica Schmitt can be reached at 860-801-5097, or eschmitt@centralctcommunications.com.