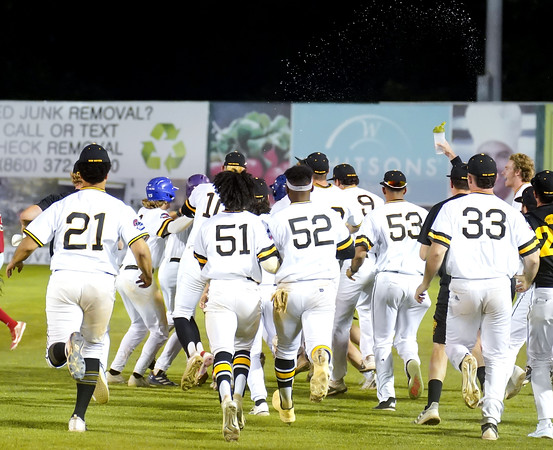 NEW BRITAIN – Every June thousands of collegiate baseball players split off from their school programs and take a two-month hiatus from the life of a normal student-athlete. At the conclusion of their college seasons, players report to their summer assignments and embark upon a season unlike any other in college athletics.

Collegiate summer baseball is meant to provide experience to players who have attended at least one year of college with at least one season of eligibility remaining while emulating the everyday grind of professional ball. There are more than 80 of these leagues across the United States with varying levels of competition from league to league. The Cape Cod Baseball League is considered the premier summer league experience with each of the last four No. 1 overall selections in the MLB Draft being Cape League alumni.

Residing in primarily southern New England, however, is the Futures Collegiate Baseball League. The FCBL is home to 320 players across eight teams each summer, 40 of which get to enjoy their summers in central Connecticut as members of the New Britain Bees.

As one of the newest members of the Futures League, Bees General Manager Bret DeRosa said the biggest hurdle when making the switch from the independent professional ranks in the Atlantic League to a collegiate league was their lack of relationships with college coaches.

Collegiate summer teams are usually constructed through lines communication between the team’s GM and college coaches. DeRosa and the FCBL put a premium on having players with a local connection on rosters. The FCBL requires at least 10 players on a team’s opening day roster to either reside in or attend a school in New England. The Bees currently have 23 players whose hometown is in Connecticut as well as nearly half their roster attending schools in-state.

DeRosa explained how some of the strongest relationships they’ve built have come from local schools. He also noted how there’s a certain level of trust that needs to be present with these coaches.

“Being in our third year now in the FCBL we have relationships with college coaches that send us some guys from schools like [Rhode Island], [CCSU] and Yale,” DeRosa said. “We don’t really get to see these guys play until the spring and then when they get here in the summer, so we have to trust that these coaches are going to send us good guys on and off the field.”

Although the Bees – along with the rest of the league – try to bring in as many New Englanders as they can, DeRosa noted how important geographical diversity can be on the roster. Manager Matt Gedman has been credited for his day-to-day help during the season, but the Bees GM also mentioned the role the former Pittsfield Suns skipper played on the recruiting trail as well.

“One of the good things about having Matt Gedman around the team this year is that he has been a coach in this league for a long time and he has relationships with some bigger schools like Kansas State, West Virginia and Oklahoma,” DeRosa said. “Hopefully now having Tyler Pettorini we’ll be able to establish a relationship with Ohio State and keep that going as well.”

Pettorini is one of a handful of players on the team with no ties to New England along with players like Christian Holmes, Benny Wilson and Jake Blinstrub.

The Bees almost went without one of their top offensive producers this season after outfielder Teddy Schoenfeld got a late start when it came to contacting summer teams. He was able to touch base with New Britain thanks to a contact with Gedman after reaching out to numerous teams on his own.

The Colorado native wasn’t as fortunate as other players who knew their summer assignments months in advance. He explained that most teams were full at that point, and he had to be on call after heading home at the conclusion of his college season at the Massachusetts Institute of Technology. He had a couple other options to choose from but ultimately had to make the move to the Hardware City just two days after receiving his full-time offer.

Another factor that comes into play when bringing in players who don’t reside in Connecticut is housing. Unlike other summer teams, the Bees don’t utilize host families for the players during the season. Instead, DeRosa was able to strike a deal with the University of Saint Joseph in West Hartford and Post University in Waterbury.

In exchange for housing over the summer, Saint Joseph will be playing games at New Britain Stadium in the spring for their new baseball program.

Along with the geographical diversity DeRosa tries to bring to his team, there is also a variety in caliber of programs these players hail from. From Ohio State of the Big 10 and UConn of the Big East, to Franklin Pierce in Division II and Eastern Connecticut State in Division III – the Bees roster players from all levels of college baseball.

DeRosa explained how the standards can be a bit different depending on where the player is coming from, but ultimately they just look for players who can make an impact in New Britain as well as at school.

DeRosa and the Bees have been able to build off a last-place finish in 2021 – their first full season in the FCBL. With a bit more familiarity on their side in 2022, New Britain is currently fighting for a top-four seed in the playoffs next month.