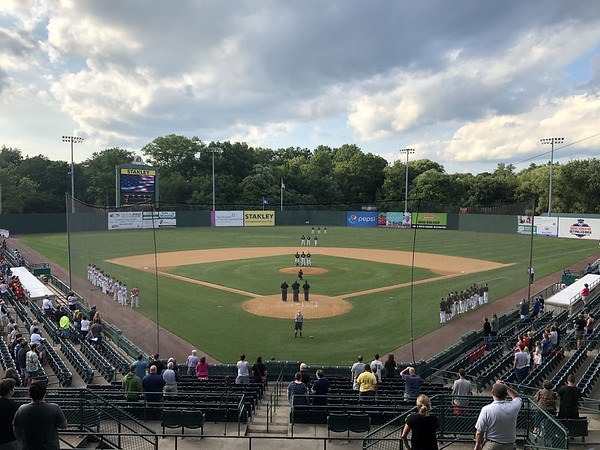 The New Britain Bees are now less than a month away from the end of the regular season, and have a lot of work to do if they want to make up ground in the Futures League standings and climb out of the basement in that time.

Heading into Friday night’s home game against the Brockton Rox, the Bees sat in last place at 4-11, 5.5 games out of first place and the only team in the league with a sub-.500 record. Due to a rainout on Thursday night, New Britain only had two games during the week, and split the two contests to remain stagnant in the standings though one of the games was a lopsided victory against Brockton, which showcased the type of offensive outburst that manager Ray Guarino and the Bees hope extends through the rest of the season.

Here is a recap of the week’s abbreviated action:

After a regularly scheduled day off on Monday, the Bees hit the road to take on the Westfield Starfires on Tuesday night, one of three teams in the league hovering right around the .500 mark for the season so far. New Britain jumped out to an early 1-0 lead in the second when Tony Socci led off with a double, then advanced to third on a sacrifice fly by Derek Tenney. Mike Caruso followed with a sacrifice of his own, sending a fly ball deep enough to right field to allow Socci to score and put the Bees ahead.

New Britain starter Drew Mead started strong, pitching six shutout innings before showing signs of fatigue in the bottom of the seventh. Still nursing a 1-0 lead, Mead surrendered a one-out double to Anthony Porrino, and the Rox took the lead immediately after, when Ramon Jimenez blasted a two-run home run to put the Bees behind 2-1.

Mead retired the next batter to keep the bases empty with two outs, but an error allowed Eric Callahan to reach, and after Callahan stole second, he scored on a double by Danny Crossen, giving Brockton a valuable insurance run and a 3-1 lead.

The Bees brought the tying run to the plate in the ninth after Griffin Arnone drew a one-out walk, but Socci and Tenney struck out against Reggie Crawford to send New Britain to another loss in a fast-paced game that took just two hours and seven minutes to complete.

The Bees had to wait a bit longer than expected to redeem themselves in Wednesday night’s contest against the Rox, as the umpires arrived late and forced a 30-minute delay to start the game. Brockton’s bats never seemed to wake up from the delay, while the Bees’ bats only seemed to heat up in what turned out to be a 14-0 rout and a much-needed laugher for New Britain.

The Bees began their offensive onslaught in the bottom of the third, in a frame where a rally seemed unlikely after the first two batters of the inning were retired. But Danniel Rivera stroked a two-out double to left, and Caruso followed with a double of his own to score Rivera and put the Bees on the board. CCSU’s Noah Martinez followed with a two-run home run to extend the lead to 3-0, and New Britain was far from finished.

The Bees added another in the fifth on an RBI single from Rivera, and after Rivera drew a walk in the seventh to reach base for the third time, Caruso sent his second extra-base hit of the night over the wall for a two-run blast to give New Britain a 6-0 lead. But the real outburst came in the bottom of the eighth, when the Bees pushed across eight runs in a disastrous inning for the Rox. The explosive frame was highlighted by yet another hit for Rivera, an RBI single, another for Caruso, who ripped an RBI single of his own, and a two-run single by Kyle Brennan.

Meanwhile, the Bees’ Brendan Kirck was on his game on the mound, tossing six shutout innings and allowing just two hits before the bullpen maintained the shutout the rest of the way.

Caruso’s big day lifted his season batting average to .355, tops on the team. Andrew Cain entered the weekend with a league-leading nine doubles, but even the team’s 14-run breakout only lifted its collective OPS to .722, tied for the lowest in the league. The Bees’ .363 team slugging percentage is last in the league by a wide margin.

Thursday night’s rainout is scheduled to be made up on July 28.