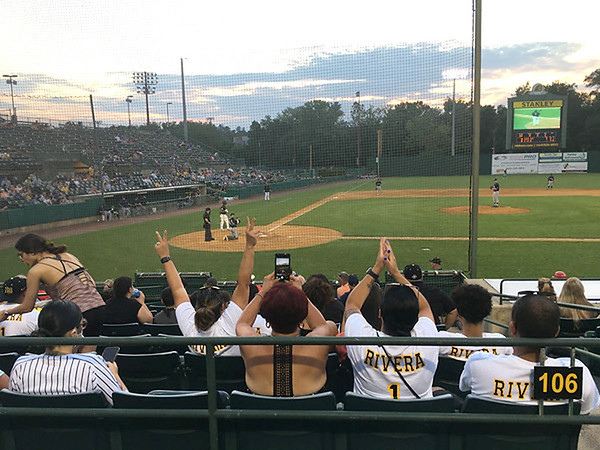 The New Britain Bees nearly completed a dramatic comeback on Sunday afternoon against the last-place Brockton Rox, but five errors and 11 walks surrendered by Bees pitching proved to be too much to overcome.

David Howarth and Derek Tenney each had big days at the plate for New Britain, finishing with three hits apiece, but the defensive struggles and control issues put the Bees in an early hole they could never fully erase.

The Rox built an early lead by pushing across a run in each of the first two innings against Bees starter Joe Mancini. Mancini, of Boston College, walked JP Knight to start the game, then surrendered an RBI to single to Jake Geleof after Knight stole second to put Brockton ahead 1-0. In the top of the second, Mancini’s control issues led to trouble again when he hit Jacob Studley with a pitch to lead off the frame, and after Pat Roche reached on an error, Studley scored on an RBI groundout by Patrick Desalvo to increase the Rox’s lead to 2-0.

Brockton broke things open in the third, and once again, it began with a walk, this time to Joe Bramanti. Mike Khoury followed with one of his own, and Buddy Dewaine singled to load the bases with nobody out. The carnage continued for New Britain when a passed ball allowed Bramati to score, and another error allowed Studley to cross to make it 4-0. A third error in as many innings put the Bees behind 7-0 in a disastrous inning that saw the Rox record just one hit, but walks and errors allowed five runs to score in the frame.

The fifth inning was a tough one for former Goodwin Tech and Bristol Blues pitcher Tommy Hughes, who walked five in 0.1 innings of work for the Bees.

New Britain got a run back in the bottom of the fourth when Howarth singled to left to score Andrew Cain, but Brockton came right back in the top of the fifth with three more runs, the first two coming on back-to-back bases-loaded walks to DeSalvo and Joel Lara before Geleof lifted a sacrifice fly to right to extend the Rox lead to 10-1.

The Bees began to chip away with a run in the sixth and seventh, but Brockton had an answer, pushing across a run of their own in the seventh and eighth to hold a 12-3 lead heading into the bottom of the eighth, when New Britain finally came alive.

Hardware City native Danniel Rivera started the scoring in the bottom of the eighth with a single to center to score Howarth and Tenney, and Christian Fagnant followed with a double to plate two. Fagnant later came around to score on an error to complete a five-run inning to pull the Bees within four.

Looking to complete an improbable comeback, New Britain started the ninth with a leadoff single by Howarth, and after Rivera drew a one-out walk, Tyshaun Diaz ripped a single to right to score Howarth, but Rivera was thrown out trying for third for a crucial second out. Griffin Arnone kept the inning alive with a single to bring the tying run to the plate in Zach Donahue, but he struck out to end the game and drop the Bees to 2-5 on the season, putting them in last place in the Futures League in the early parts of the shortened season.

The Bees pounded out 18 hits in the afternoon contest, but left 10 men on base in the losing effort.

The Bees are off on Monday before hitting the road to take on the North Shore Navigators on Tuesday night.