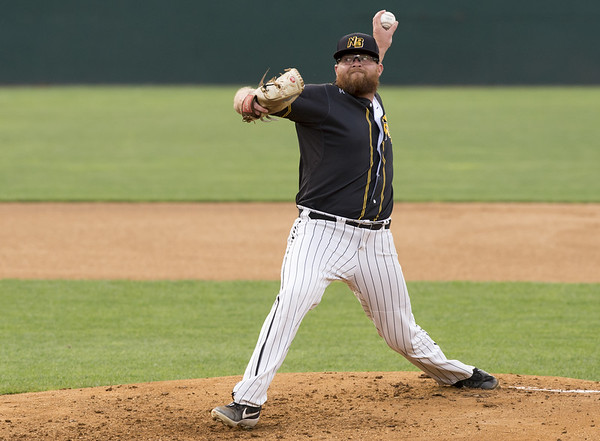 NEW BRITAIN - The New Britain Bees faced a golden opportunity to continue making up ground in the Liberty Division this past weekend when they hosted the first-place Long Island Ducks, but that opportunity went unclaimed.

After a win in the series opener on Friday night, New Britain dropped the next two games as the Ducks took the series and stretched their division lead to four games over the Bees, whose best shot at a postseason berth is through Long Island and the Liberty Division, as they sit even further back in the Wild Card race - 11 ½ games to be exact.

Fortunately for the Bees, another chance to make up ground on a team ahead of them in the standings begins on Tuesday, when New Britain travels to North Carolina to face the High Point Rockers in a three-game series. The team’s two straight losses this weekend were its first losing streak in two weeks when the Bees dropped a series opener to the Rockers after losing the series finale to the Southern Maryland Blue Crabs. But New Britain was able to rebound and take the next three from High Point to begin its recent strong stretch of baseball. The team is 9-4 over its last 13.

Though the Bees took three of four from the Rockers the last time they faced each other, it didn’t come easy. New Britain’s three wins of that series were by a combined five runs, with two of them coming by just one run. Assuming this series will be just as competitive, the Bees will have to continue to get production from their starting pitching, which turned a corner in that last series against High Point.

David Roseboom pitched against the Ducks in the series opener back on Friday and was solid once again, allowing just two earned runs through seven innings while striking out seven to lower his season ERA to 3.38. He will likely get the ball to start one game of this series, and not only does he have momentum from his previous start, but his last outing against the Rockers was a success as well. Back on Aug. 13, Roseboom held High Point to one earned run through seven innings, allowing just three hits along the way. Roseboom, one of the newest additions to the Bees’ pitching staff, has been one of the team’s best since the second half of the season began, and New Britain will need him to continue that trajectory this week on the road.

The Bees were also able to win its last series against High Point thanks to a reliable bullpen, though that usually stable back end stumbled this past weekend. Jose Rosario, one of the best relief arms in the Atlantic League, was tagged for five runs on four hits, two of them home runs, in just one inning of work in Sunday’s series finale against Long Island. That hiccup turned a 2-1 lead into a 6-1 deficit, and New Britain lost 6-2.

One of the key factors behind the Bees’ success against High Point was the production from the bottom of their lineup. In New Britain’s 3-2 win on Aug. 13, Roseboom was backed by Logan Moore and Rando Moreno, the eight and nine hitters in the lineup, who combined to go 4-for-8 with a crucial run scored. The following day, Moreno picked up two more hits and two RBI while Moore and Zach Collier each picked up hits in the bottom third of the order. In the series finale, it was Moreno again, going 1-for-1 with a pair of walks, an RBI and a run scored out of the nine hole to help the Bees pick up a 6-5 victory.

After High Point, the Bees have 10 straight games against teams below .500, but first, they must take care of business on the road against the Rockers to improve their playoff chances. With less than a month left in the season, every game against teams ahead of them in the standings is crucial.