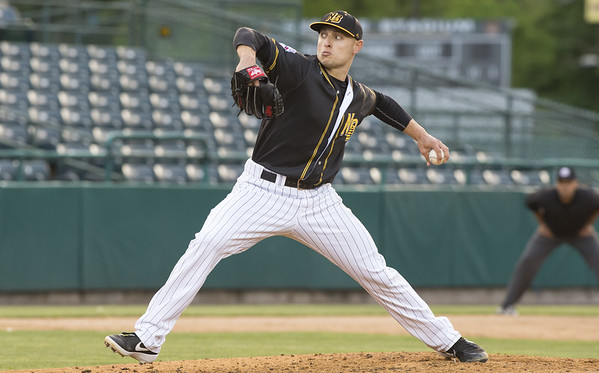 NEW BRITAIN - The New Britain Bees, well into their fourth season as an Atlantic League franchise, have hovered near the .500 mark for most of the year, have showcased major league veterans such as Alejandro De Aza and a number of other former big leaguers, and have a manager in Mauro Gozzo with strong ties to the local area.

Still, filling up New Britain Stadium for Bees home games has been a challenge.

Before the season began, one of the main missions for the New Britain front office, aside from putting a winning team on the field, was to win over the heart of their city and pack the stadium in a way that they hadn’t been able to do since the team arrived in 2016.

“It’s no secret we need to get more fans out here,” general manager Brad Smith said prior to the start of the 2019 season. “Once people get here, it’s a great product we’re putting out there, from the entertainment side to the baseball side of things.”

Getting people to the ballpark has been an issue throughout the season. Whether it’s competing with the nearby Hartford Yard Goats or a general lack of interest toward a sport considered to be losing traction with younger generations, the situation is one of concern for the Bees, though they have continued to do their part in putting a notable crop of talent on the diamond.

“I think the product on the field is certainly where it needs to be,” Gozzo said. “I don’t think it’s a matter of ‘those guys aren’t that good’ or anything like that. I know in having discussions with the GM that we’re up in attendance a little bit from last year, but I think we could spread the word a little bit more about this brand of baseball.”

According to current numbers on the Atlantic League’s official website heading into the weekend series against the Long Island Ducks, attendance is actually slightly down compared to the 2018 season.

According to the website, the Bees averaged a total of 2,654 fans per game over 69 openings last year. This season, the league has New Britain averaging 2,098 fans over 51 openings, and both marks were and are the lowest in the league. This year, the Bees’ mark is below even that of the High Point Rockers, who are in their first season of existence.

Of course, there are a number of factors working against the Bees. The Rockers may be new to the league, but their location itself presents an advantage, playing in warm, often sunny North Carolina as opposed to the shorter summers of central Connecticut.

However, the Somerset Patriots have endured the northeast trials and average more fans than anyone in the league, though they are a much more established franchise. Somerset is also the winningest franchise in the Atlantic League, having won six titles, and as the team said before the season, nothing draws a crowd like winning.

Still, there are other ways of bringing people to the park, and Gozzo has some ideas.

“I think the big holdup is that it’s not affiliated with an organization that people are familiar with,” Gozzo said of the Bees. “This is an independent professional baseball team, but you can research the players, and we can do more with explaining where these players have been to the general public. The De Aza’s and the [Jonathan] Galvez’s, where have these players played? The answer is the major leagues.”

The crowd still hasn’t come in the way New Britain hoped, but Gozzo and the Bees haven’t stopped working to win over the city. With Gozzo’s ideas and a desire to win, the franchise refuses to give up on what they know is attainable.

“If I’m a baseball fan and I want to watch a quality baseball game, if I can come for five dollars to park and five dollars a ticket and see this kind of baseball, that’s a great baseball game,” Gozzo said. “I think we all need to educate the general public as to what brand this is, and the way to do that is show where these players have been. I think the more we educate the general public of what this brand of baseball really is, it will start to draw more people.”