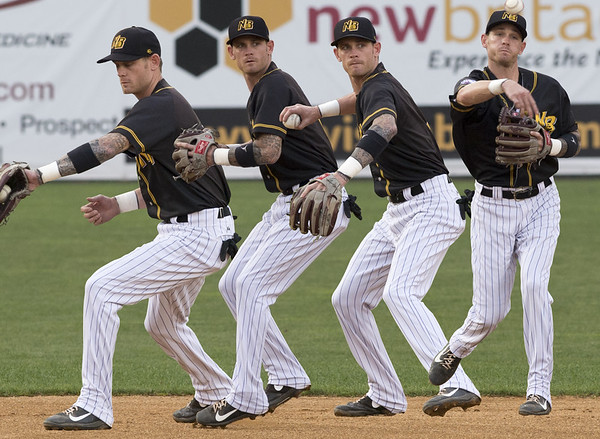 NEW BRITAIN - Like almost every other player in the Atlantic League, New Britain Bees infielder Ryan Jackson wants to get back to affiliated baseball.

The former member of the St. Louis Cardinals and Los Angeles Angels began the season with the Sugar Land Skeeters before coming to the Bees, but the goal is to get to a major league affiliate for the first time since 2017.

Still, the emotions of baseball tend to remain the same regardless of the level of competition, so when Jackson watched his walk-off single fall to the outfield grass on Tuesday night against the High Point Rockers, he reacted with a similar emotion to the big hits he experienced during his nine seasons on the affiliated stage.

“That one felt good,” Jackson said of the walk-off winner that took down the first place High Point Rockers. “That was really cool to come through and avoid extra innings and get us the win. That was important.”

For many in Jackson’s spot, the path back to their ultimate goal can become inwardly focused: put up solid individual stats to catch the eye of a major league organization and get back to the big show.

Jackson’s mindset this time around is a different one. The 31-year-old believes that in helping the Bees, as he did on Tuesday night, he will be helping his own cause.

“It’s great to come through as a team in a big spot,” Jackson said. “I messed up a bunt the night before, so to come through in that spot and get us a win and hopefully start gaining some momentum, that’s important. I take that seriously.”

“Serious” and “winning” are two prevailing words mentioned when the subject of Jackson is brought up to manager Mauro Gozzo.

The infielder hasn’t been around the team long, but it didn’t take long for his mindset and demeanor to become very clear to the team and Gozzo himself.

“The character when you talk about a guy like Ryan, it’s unbelievable,” Gozzo said. “He’s a leader by nature. It’s great to have. He commands presence by being as serious as he is when he’s out there. He gives his all every time. He’s a winner.”

Gozzo has immediately taken to Jackson, and vice versa. Jackson’s walk-off was part of a two-hit night that has helped move him up near the heart of the Bees’ lineup, hitting in front of power threats like Jonathan Galvez and Jason Rogers, who each find themselves near the top of the Atlantic League in OPS.

“It’s been good,” Jackson said. “I was able to come in and play well, and they have a really good group of guys. I’ve been able to settle in well.”

Jackson’s surroundings have helped him jump out to a fast start in New Britain, and by playing with a motivation to help those surrounding him, he has in turn helped himself.

“Of course that’s the goal,” Jackson said of the prospect of making a return to affiliated baseball. “I just want to stay consistent every day and play winning baseball. The more that goes, the more good things happen. I just want to keep getting better every day and show that I can hit.”