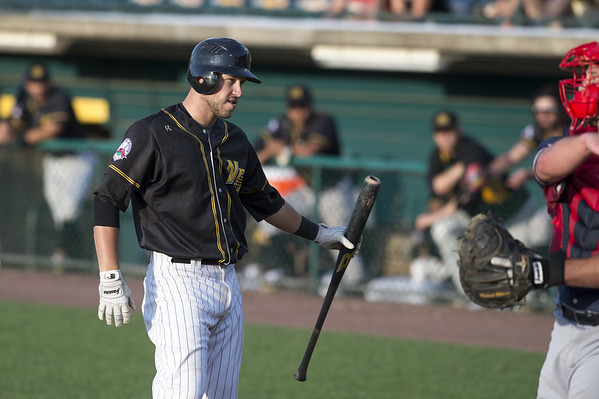 NEW BRITAIN - Back at it again.

Just five days after facing each other in a four-game series in Central Islip, New York, one that ended with a series win for the New Britain Bees, the Bees and Long Island Ducks are getting ready for another showdown - this time at New Britain Stadium for some much-needed familiar scenery.

After a day off on Monday following a disastrous outing against the York Revolution to close out their trip, the Bees will certainly look swing the momentum back in their favor over the next three games, which will be part of a six-day homestand.

Here are some things to watch for over the next few days:

A CHANCE TO GAIN SOME GROUND

As it currently sits, New Britain is two games behind the Ducks in the Liberty Division standings. The second half of the season is only a little over two weeks old, but the Bees will only play Long Island three more times this year after this series, while facing the High Point Rockers 10 times and the Somerset Patriots seven times before the regular season draws to a close.

With the Ducks looking to be the top team in the division once again, any kind of games the Bees can gain or makeup ground now will only be helpful in the long run. Long Island will play 16 more divisional matchups - aside from the two series against New Britain - the rest of the way.

HOW WILL THE PITCHING FARE?

One of the Bees’ issues this season has been the consistency - or lack thereof - of their pitching. It started out well during the seven-game road trip, but quickly faltered, leaving plenty for the offense to makeup. Outside of the first two games of the four-game set against the Ducks last week, New Britain has allowed at least eight runs its last five games, allowing eight runs, nine runs, 11 runs, 10 runs and 19 runs. The team’s record over that stretch was 2-3 and playing that way over an extended period of time is going to be difficult.

Entering the series, the Bees currently rank last in the Atlantic League in team ERA (5.18) and second to last in WHIP (1.50), while their offense ranks .272/.351/.417 which is the second-best, second-best and third-best in the league. In other words, New Britain is hitting, and more often than not, scoring plenty. It’s just a matter of the pitching keeping opponents off the base paths.

The Ducks, meanwhile, are more than a point better in ERA (4.13) and half a point better in WHIP (1.34), which puts them in the middle of the eight-team league rankings. Their offense is in the bottom-half of the league, showing that quality pitching can result in wins. It’s something the Bees are going to have to get, both in this series and moving forward.

GALVEZ AND RADEMACHER NEED TO CONTINUE TO HIT

While New Britain has had little trouble scoring runs over the last few games, Jonathan Galvez and Bijan Rademacher have provided plenty of hits and offense for the Bees and it will important for them continue doing so.

Galvez currently ranks third in the league with a .332 batting average and fifth with 54 RBI. The infielder is also New Britain’s leader in home runs with 13. Over his last three games, Galvez is hitting .700 (7-for-10) with a home run and five RBI.

Rademacher, on the other hand, appears to finally be hitting his stride at the plate after a rough start to the season. The outfielder is hitting .273 with 11 home runs and 31 RBI. He went 4-for-11 with four RBI and three runs scored over the series against the Revolution.

Those two will need to keep hitting well if the pitching staff continues to struggle. They have been so far.