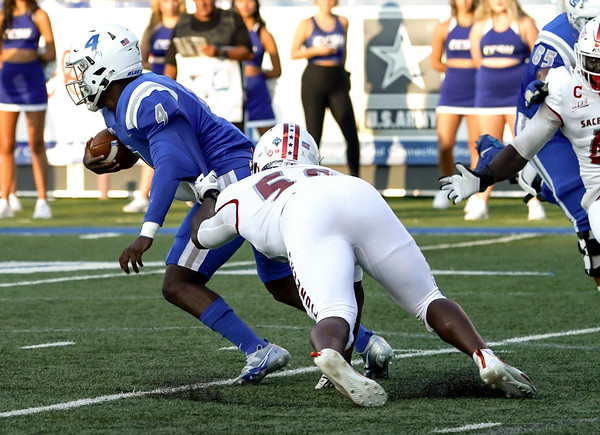 NEW BRITAIN – On the heels of a Week 1 loss at UConn, the Central Connecticut State Blue Devils were ready to kick off their conference schedule from the friendly confines of Arute Field. The Devils welcomed the in-state rival Sacred Heart Pioneers, who were also on the hunt for offensive results after being shut out at Lafayette a week ago.

Self-inflicted wounds will once again be the factor that sticks in the heads of the Blue Devils after their second-straight loss, however. The Pioneers held off Central long enough to escape New Britain with a 14-10 victory – their first of the year.

Both teams hit the field with emotions at the surface, disappointed with the way things ended last weekend. Unsportsmanlike conduct, targeting, personal foul and roughing the passer were all checked off the teams’ collective bingo cards by the end of the night. Senior CCSU linebacker Chizi Umunakwe said this is what comes with the territory when a rivalry game meets a home opener.

“The atmosphere was amazing,” said Umunakwe. “This is what you expect in a rivalry season opener… It was great energy. You can’t ask for anything better.”

It was slow going out of the gate for both sides. Despite owning two of the three longest drives of the first half, Central still found themselves trailing after the first 30 minutes.

Sacred Heart made the first move on the scoreboard for their first points on the season. The Pioneers took over in Blue Devils’ territory and only had to drive 35 yards over 10 plays for the score. It was senior running back Malik Grant who punched it in from two yards out for the score.

Keeping Grant at bay was the main point of emphasis for Central throughout the week. The former Walter Payton Award finalist was kept quiet for much of the first half outside of the lone touchdown. Grant only ran for 26 yards through the first two quarters.

What was Central’s most promising chance to that point came in the final six minutes of the first half. CCSU took over near midfield following a SHU punt. Junior quarterback Romelo Williams and company marched down as close as the Pioneer 2 yard-line. Targeting and personal foul calls helped the Devils’ gain such promising position, but the offense returned the favor just as fast to miss out on a touchdown.

A pair of dropped passes and a holding call were the main factors at play that pushed Central behind the sticks, forcing them to settle for a field goal.

Central head coach Ryan McCarthy gave credit to the Pioneers for the way they executed and slowed the Devils’ offense in the first half.

“They’re a difficult group,” said McCarthy. “They play really hard, and they play well within their scheme… They took away a lot of the exterior runs which we expected they would after the success we had last week at UConn.”

Smith notched CCSU’s first touchdown in 2022 late in the third quarter. The score capped off a nine-play, 90-yard drive which included back-to-back 24 and 17-yard rushes before the score.

Sacred Heart also turned to backup quarterback Rob McCoy to take on some of the running duties. He rushed five times for 48 yards in the second half including what ended up as the game-winning touchdown for the visitors.

The Blue Devils found themselves with one final chance to shift the score after their second forced and recovered fumble of the night. The takeaway set up the offense near midfield with 6:45 to play. Smith rushed for 20 yards on the drive to help get Central down to the 5 yard-line.

A play call which McCarthy took credit for led to an interception in the end zone to put the game on ice for the Pioneers.

Umunakwe did not take the home loss lightly. The linebacker made it abundantly clear that this will not happen again on their home field this season.

The Blue Devils will be on the road for the next three weeks, but Umunakwe will have a chance to begin to prove himself right on Homecoming Weekend when they welcome Brown to Arute Field on October 8.