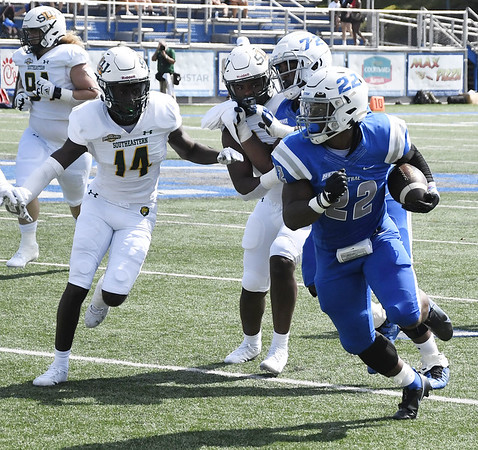 Nas Smith (22) looks down fielcdd as Southeastern Louisiana defenders close in for a stop earlier this season. | Tyler Hetu Buy this photo
Published on Sunday, 21 November 2021 19:22
Written by TYLER HETU

NEW BRITAIN – A game-winning field goal from Joe Zoppi closed the book on Central Connecticut State football’s season, with the 31-yard try going through the uprights as time expired to put the Blue Devils on top 24-21 over Saint Francis University on Saturday.

A game-tying touchdown by SFU’s Kahter Summers put the game even at 21 with 5:30 go, and trading drives, the Blue Devils were given 2:12 on the +27-yard line to find a score.

A combination of Nas Smith runs helped get CCSU inside the 15, setting up timeouts with five seconds remaining before Zoppi’s kick attempt.

Zoppi finished the day as a pivotal part of the offense, converting three field goal attempts with one extra point.

Prior to the game-tying score, the Blue Devils got on the board with Zoppi’s first field goal from 21 yards out with under four minutes to go in the first. SFU answered back nearly a minute later, going 67 yards in 51 seconds for a Marq DeShields 14-yard score.

Saint Francis added another touchdown to give them its biggest lead of the game at 14-3 from a Brand Lisenby 7-yard score. CCSU responded with a Theo Zidor 2-yard reception, driving 57 yards in 4:13 to bring the it to a one score game again at 14-10.

Zoppi’s second field goal, this time from 39 yards at 1:16 in the third, pulled the game to 14-13. The Blue Devils continued to score, capping off a 76-yard drive with an Erik Surratt 33-yard touchdown (with a successful 2-point try), to make it a 21-14 game. The 18-0 run by CCSU was then snapped Summers’ game-tying score

Shonn Mitchell got the start at quarterback in the finale, finishing 12 of 32 with 124 yards passing and two scores. Smith led all rushers with 95 yards gained on 19 tried. Aaron Dawson was also good in the backfield, running for 68 yards.

Kyren Petteway led receivers with 35 yards while Tyshaun James and Surratt both had 33 yards. Petteway and James each had three receptions.

The Blue Devils close the season as the leaderin acerage time of possession across all of the FCS Div. I level, averaging over 34 minutes with the ball per game. They were also the national leader in minutes with possession as well with 378 minutes.