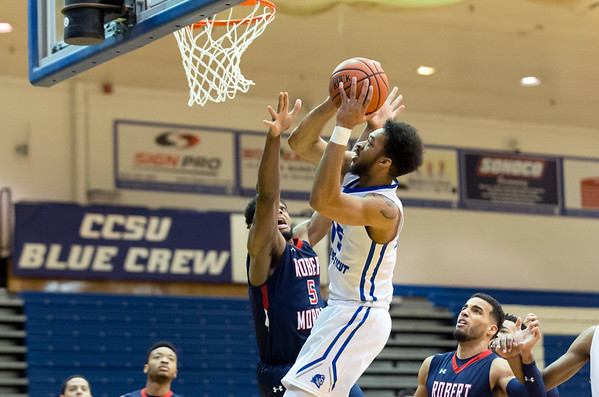 LOWELL, Mass. - The Central Connecticut menâ€™s basketball team fell at UMass Lowell in the final minute, 73-71, on Sunday at the Tsongas Center.

Obadiah Noel hit the game-winning layup for UMass Lowell (4-5) with five seconds to play and the Blue Devils were unable to get off a shot in the final possession, falling to 0-8 for the season.

Coleman scored Centralâ€™s first seven points and CCSU took an early 11-6 lead with a 6-0 run just under four minutes into the game, but UMass Lowell held CCSU scoreless for over 5:00 and scored 12 straight points as part of a 14-2 run to take a 20-13 lead midway through the first half.

Central responded with a 9-0 run, sparked by back-to-back buckets from freshman Greg Outlaw to regain the lead at 22-20. The River Hawks would regained the lead, outscoring CCSU during a 9-2 stretch, but a spinning layup by junior Stephane Ayangma got the Blue Devils within 38-35 at the half.

Central hit 5-of-6 shots to open the second half and the teams went back-and-forth for much of the period. An 8-0 run late in the half by UML gave the River Hawks a 67-62 lead with under 4:00 to play.

Central has gone 3-2 against UMass Lowell since the 2003-04 season. The teams have met in each of the last five seasons, with CCSU winning the previous two matchups before Sunday. â€¦ Coleman scored 15 points (7-9 field goals) in the opening half, the highest-scoring half by any Blue Devil this season. Coleman finished 12-of-16 from the field to match a personal-best 27 points. â€¦ Outlaw finished with 16 points on 7-of-12 shooting. He added two steals and two blocks. â€¦ Freshman Xavier Wilson had three blocks and three steals, along with a team-high seven rebounds. â€¦ Ayangma and freshman Jamir Reed each added eight points, while freshman Myles Baker had a pair of three-pointers. â€¦ CCSU shot 53.3 percent (16-30) from the field in the first half, the best shooting half by Central this season. â€¦ CCSU committed just 12 turnovers, but was outrebounded 40-29.