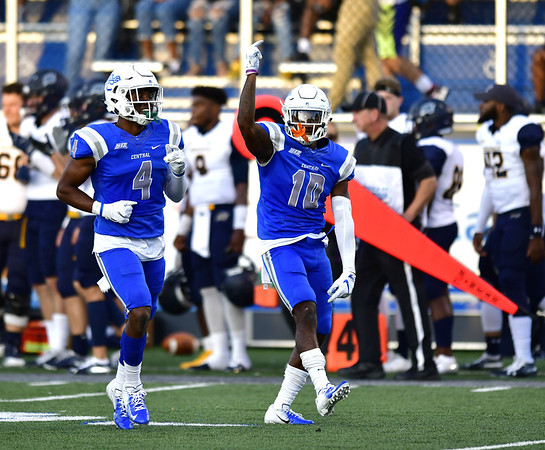 FAIRFIELD - The in-state rivalry game between the Central Connecticut State and Sacred Heart football teams was one-sided on Saturday afternoon. It couldn’t have worked out any better for the Blue Devils.

Danley Exilhomme and Tyshaun James each scored twice and the CCSU defense forced four turnovers as the Blue Devils beat the Pioneers 28-3 in their NEC opener. CCSU now leads the all-time series 13-9.

“I thought our defense played outstanding,” Blue Devils head coach Ryan McCarthy said of his team’s performance coming out of the bye week. “I thought all three phases of the game were great. We played a really complete football game. I don't think we had played all three together to this point, but the defense kept them off the scoreboard. Offensively we controlled the ball, especially in the first half. Always good to get a conference win.”

CCSU (4-1, 1-0) took control of the game from the beginning. The Blue Devils’ first two drives took 22 plays, 11 minutes and 54 seconds and 130 total yards. They were stopped on a 4th down on their first drive, but scored a touchdown on their second possession on a 5-yard run from Exilhomme.

CCSU outgained Sacred Heart (3-2, 1-1) 164 yards to three in the first quarter and 464-238 overall and went into halftime up 14-3 after James scored on a 4-yard run in the second quarter to capitalize on a Pioneers’ fumble.

The Blue Devils increased their lead to 21-3 after Aaron Winchester connected with James on a 10-yard touchdowns pass five plays after Kendall Coles intercepted for St. Paul quarterback Logan Marchi.

James finished the game with five catches for 74 yards and four rushes for 12 yards. Winchester completed 19-of-25 passes for 275 yards, while rushing for 62 more yards.

Exilhomme's 1-yard plunge with 3:03 left in the quarter capped off the scoring. He finished with 64 rushing yards on 15 carries.

Marchi was 10-for-28 for 126 yards and two interceptions as Sacred Heart was help to its lowest scoring output of the season. The Pioneers came into the game averaging 35.5 points and 443.5 yards of offense. CCSU sophomore Aiden Rosa picked off Marchi with 50 seconds into the fourth quarter. Rosa also had the game’s only sack.

The Blue Devils will wrap up its stretch of four straight road games next Saturday at Columbia before host Bryant on Oct. 19.