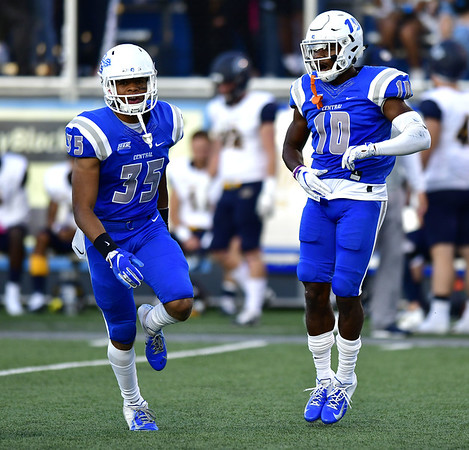 VALPARAISO, Ind. - As training camp ended, Ryan McCarthy was a little bit worried about his defense’s lack of generating turnovers.

So far this season, the defensive unit for the Central Connecticut State football team has eased some of those concerns for its head coach.

The Blue Devils intercepted Valparaiso five times by five different players, including Kendal Coles’ 30-yard return for a touchdown, as they beat the Crusaders 42-13 on Saturday afternoon in the first-ever meeting between the two schools.

Jahlil Brown and Lawson, Jr. intercepted Chris Duncan in the first half, while Coles and Bagley took the ball away in the third and fourth quarters respectively. Marlon Brown, Jr. picked off Joe Mullen late in the fourth.

Duncan completed just 24 of 47 passes for 214 yards for Valparaiso and was responsible for its only offensive touchdown on a 1-yard run with 5:54 left in the third. Jamari Booker’s 30-yard return on a blocked punt in the first quarter to open up the game’s scoring was the Crusaders’ other touchdown.

While CCSU’s defense was having its way with Valparaiso, it took the Blue Devils’ offensive unit a while to get going.

After being shutout in the first quarter, CCSU scored twice in the second on a 7-yard touchdown catch by Tyshaun James and an 18-yard run by quarterback Aaron Winchester.

The Blue Devils’ signal caller finished the day 11-of-15 for 147 yards and a touchdown, while accounting for another 52 yards on the ground. James’ touchdown reception was his fifth time he’s found the end zone this season.

It wasn’t until the second half when CCSU finally hit its stride. The Blue Devils scored 42 of the final 49 points in the game, including 28 straight in the second half, in large part due to running back Keonte Lucas.

The redshirt sophomore carried the ball 10 times for a career-high 190 yards and a pair of touchdowns. The first was a 75 yarder to answer Duncan’s 1-yard run nine seconds earlier. The second, an 85-yard run, almost 3 minutes and 30 seconds after Coles’ interception return.

Danley Exilhomme capped off CCSU’s scoring with a 1-yard run late in the fourth. Overall, the Blue Devils finished with 315 rushing yards and averaged 8.3 yards per carry.

“A win is a win,” McCarthy said. “We started very slowly, but we eventually found our way in the third quarter. “The defense did a great job of creating turnovers and the offensive line and running backs asserted themselves in the third quarter. What's disconcerting is the fact that we have not corrected our mistakes from the previous two weeks and we have yet to put together a complete game in all three phases.”

Now, CCSU (3-0) will get ready for perhaps its biggest test of the season as it travels to face FBS opponent Eastern Michigan next Saturday.