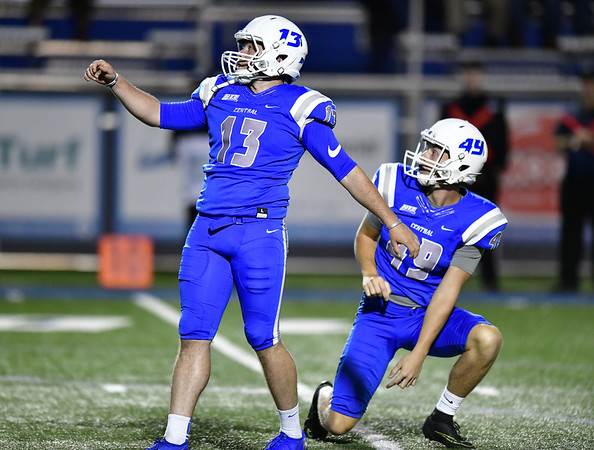 NEW BRITAIN - As Francis Cole and his teammates watched the 44-yard kick sail through the uprights, the Central Connecticut State sideline erupted in cheers, the kicker mobbed for delivering again late.

It was a much different scene on the other side of Arute Field late Saturday night.

The Merrimack football team, which had been so loud and boisterous only a minute before Cole’s field goal, after tying the game with two touchdowns in the final two minutes of the fourth quarter, went quiet. And the Warriors’ defenders who had attempted to block the kick and were laying on the turf looked up and immediately put their heads down. They knew it was over.

CCSU walked off the field with a 40-37 victory after Kendall Coles’ interception on a last-attempt Hail Mary officially sealed the win. More importantly, the Blue Devils (2-0) headed back to their locker room with another dose of confidence.

“I think that shows us that we have a lot of heart on this team,” senior linebacker Tre Jones said. “We never fold, we never quit. The group had every intention of winning that game.”

Sure, there were some miscues along the way. CCSU let a 37-14 lead heading into the fourth quarter slip away. But it was also back-to-back weeks the Blue Devils engineered a game-winning drive, showing they could come up big when it mattered the most.

Last week against Fordham, CCSU went 61 yards in six plays over the final 1 minute, 53 seconds. Against Merrimack, the Blue Devils used five plays to drive 45 yards, capped off by the 44-yard field goal in just 45 seconds.

“You have to be mentally tough to win games like that,” said CCSU junior wide receiver Tyshuan James, who finished with 114 total yards and three total touchdowns in the win on Saturday. “If you’re not mentally tough, you ain’t going to come out with the win. But we as a team don’t want it to come down to that, so we’re going to try our best during practice to pick it up during the week and listen to our coaches.”

Last season, most of the Blue Devils’ games were fairly one sided. CCSU would either win big or lose big with only three games being decided by seven points or less. But of those three games - Lafayette, Sacred Heart and Duquesne - each ended in a loss and ultimately cost the Blue Devils a chance at winning back-to-back Northeast Conference titles.

Yes, it’s only been the first two games of the season. And yes, neither of those matchups count towards the conference schedule (Merrimack was on CCSU’s schedule before the school was announced to join the NEC over the winter). But being able to win games late can never be considered a bad thing, especially when it entails having to engineer game-winning drives in back-to-back weeks or leave with a loss.

So far, so good in that regard.

“It’s great” said senior quarterback Aaron Winchester, who completed passes of 8, 16 and 26 yards on that final drive. “I think once we get deeper into the season and deeper into conference play, we’re going to be able to look back at these two games and say, ‘hey we’ve done this before. We’ve done this in game situations, not practice.’ So that confidence in our guys, and me, is up to 100. We’re not going to have to think about doing it when we’ve done it multiple times.”

Of course, with games against Eastern Michigan (an FBS opponent), Columbia (another loss from the 2018 season), Sacred Heart, Duquesne, among others still on the schedule, the Blue Devils would like to avoid having to have games come down to the wire.

Merrimack, a team transitioning from the Division II level, outscored CCSU 16-3 over the final quarter of play. And the Blue Devils were kept off the scoreboard from the midway point of the third quarter until Cole’s field goal in the waning seconds. Any kind of lull in future games most likely end in the same results it has in the first two weeks.

“Our kids kept their composure,” head coach Ryan McCarthy said. “I just think they feel like they’re never out of a game. But they need to understand and will understand after we watch the film that it should have never gotten to that point. When you get a team on the ropes, you have to put them away and we didn’t do that.”

But for now, CCSU will enjoy the win and the confidence that comes with it. After all, 2-0 is much better than 1-1.

“I have extreme confidence my guys,” Winchester said. “I think with that, and executing, and taking those situations from practice into the game helps us a lot. I think we were able to have that confidence and do it.”