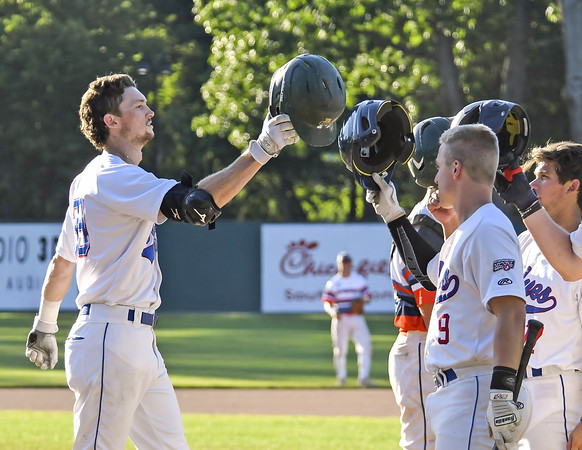 Bristol Blues General Manager Jordan Scheiner defines the “Bristol Way” as putting in hard work, competing and most importantly, winning. He said throughout the organization’s tenure, they have consistently won and have made deep runs into the playoffs, but after last year’s losing season it was time to get back to what the Blues are known for.

Scheiner said heading into this season the team made three important changes to get back to being successful. The changes came from a player perspective, a coaching standpoint, as well as organizational change. He said already just half way into the season the changes have paid off.

“I am thrilled at the start that we have had,” Scheiner said. “We have won more games this year than we have all of last year and that has to do with the team that we brought in and the coaching staff. I couldn’t be happier.”

From a player perspective, the Blues changed the type of player that they wanted on the team. He said first and foremost, the Blues wanted players with good character and who would stay throughout the whole season. However, he also wanted players from mid-major Division I schools.

“It’s always a gamble, but when you get the best players from those schools and they are going to perform 100% of the time,” he said.

Scheiner said one player that immediately comes to mind when thinking of the Bristol Way and the mid-major athlete is Bristol native Jagger Duquette, who currently plays at Wagner College. He said Duquette, who was previously an intern and mascot for the Blues, has had great success so far.

“It has kind of come around full circle,” Scheiner said. “He sums up Bristol Blues baseball. A kid that works hard, is a great kid, can play and is always in the community talking to the fans.”

From a coaching standpoint, Scheiner said Tim Binkoski has brought in a “tremendous” staff that has created an environment for success. He said he often pulls into the ballpark and sees players and coaches working out far before their scheduled practice. He said the more these players work on those mechanics and techniques it will translate to the team’s success on the field.

Lastly, organizationally, Scheiner said the team has done more this year to go out into the community and bring fans into the ballpark with their different promotions.

“I think that translates to our success on the field,” he said. “It creates a better environment for players to play.”

Scheiner said heading into the next half of the season he is looking for the same intensity and drive the players brought in the first half. He said the July schedule will be more difficult with the amount of away games the team has to play on the back end. Eleven out of the final 18 games for the Blues are on the road, starting Friday night at Vineyard.